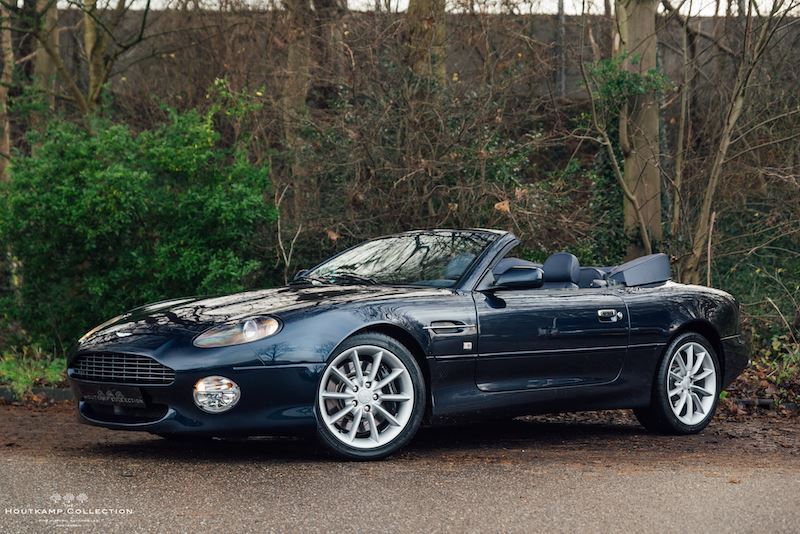 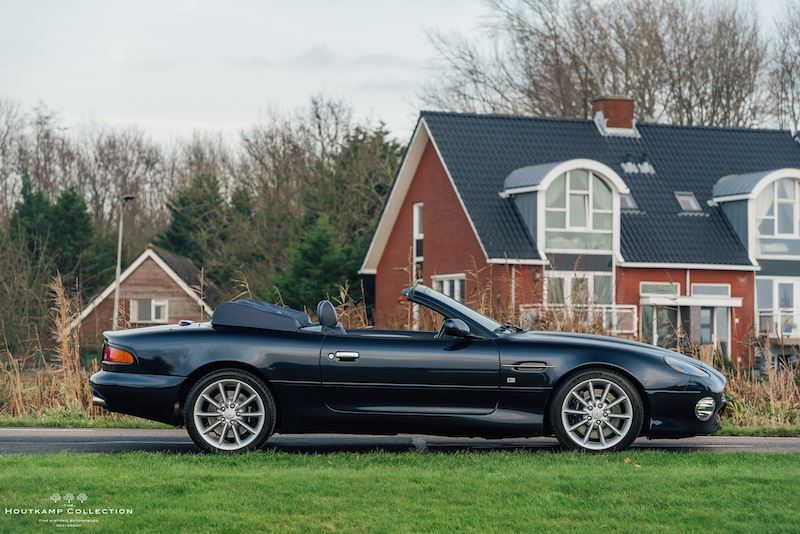 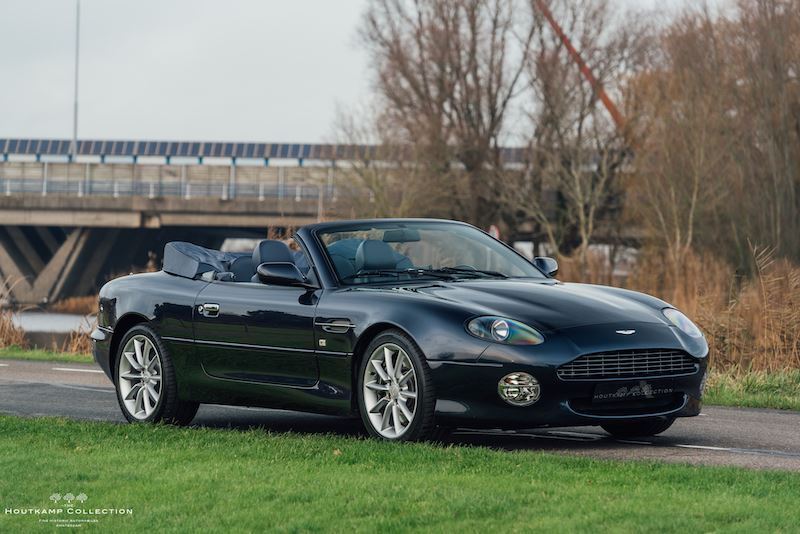 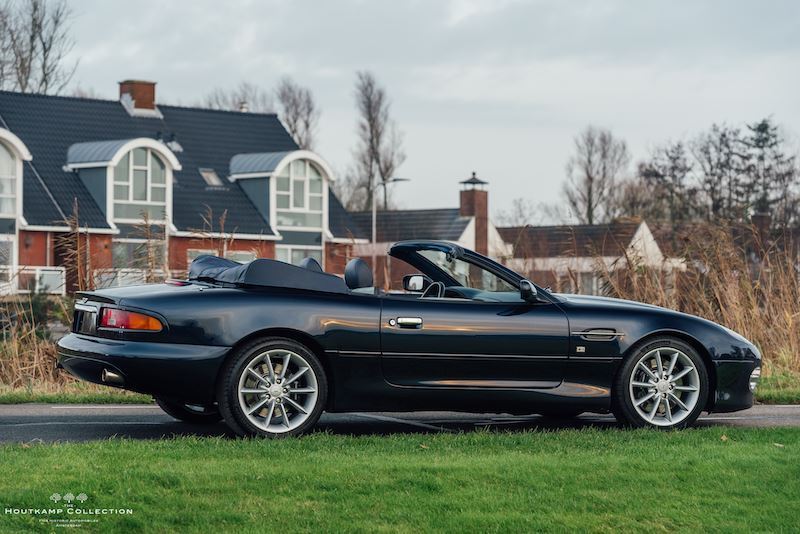 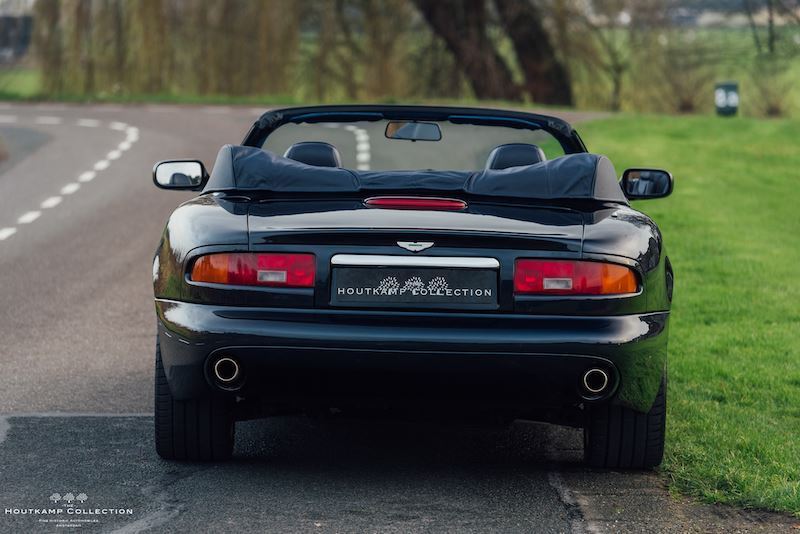 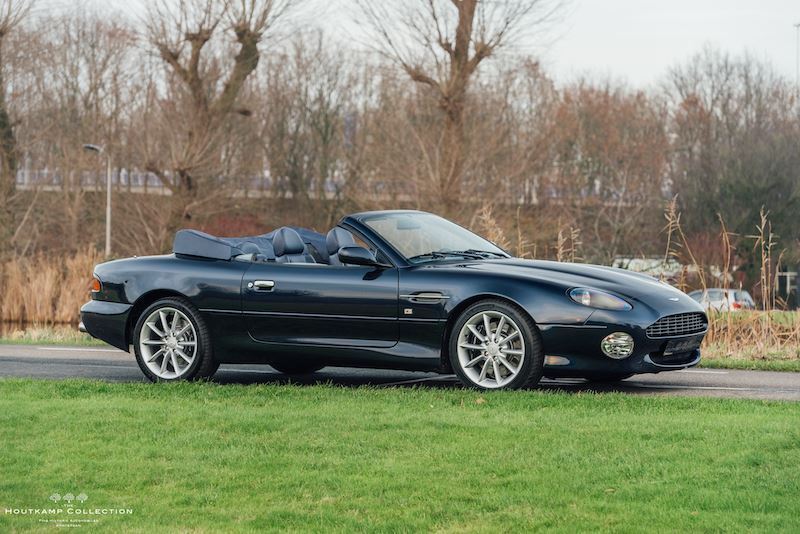 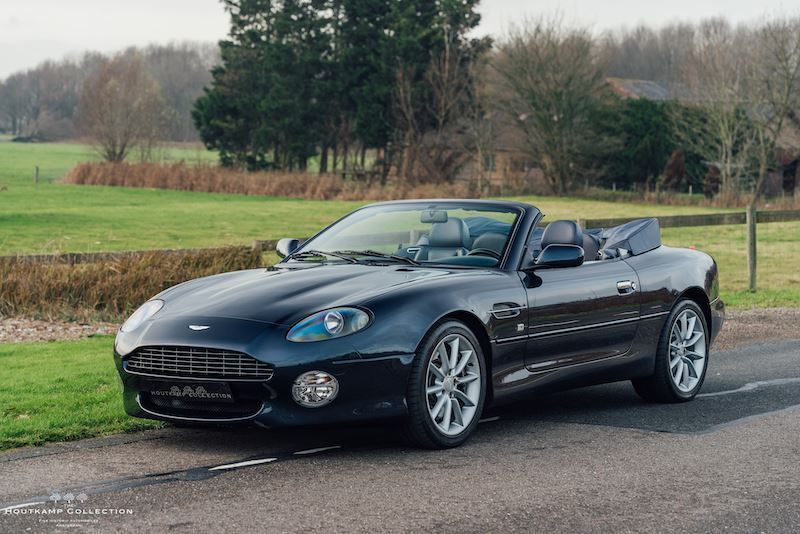 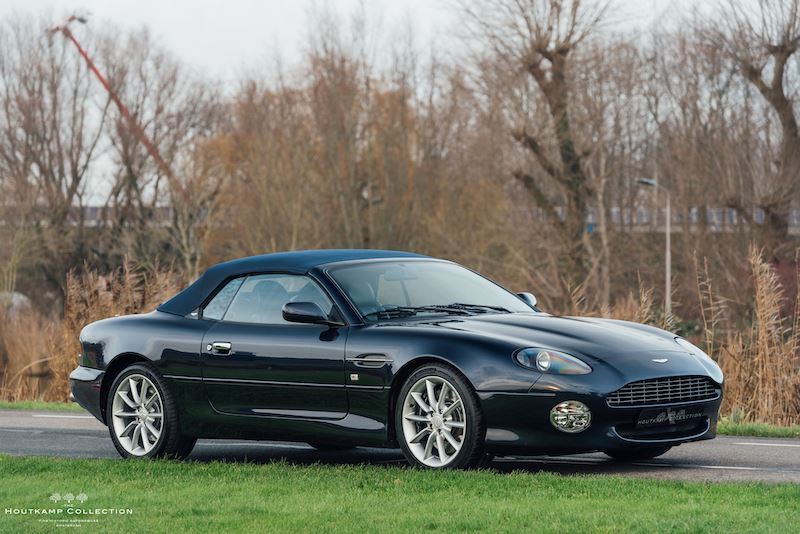 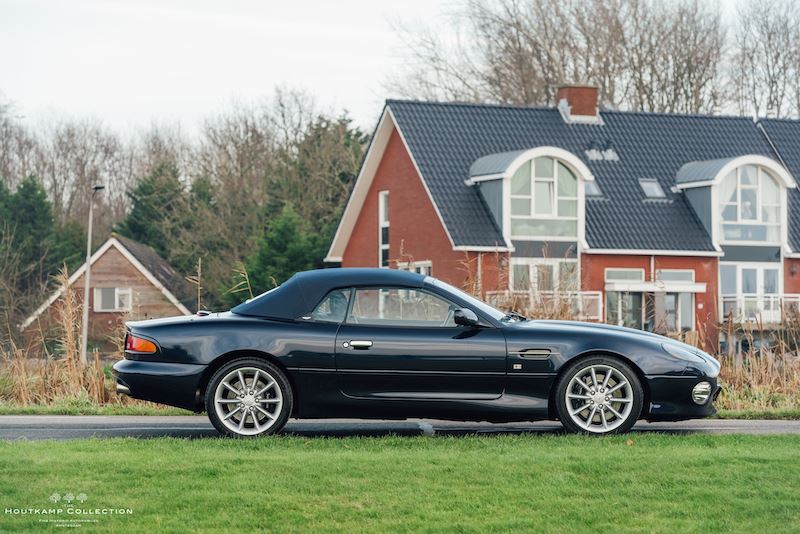 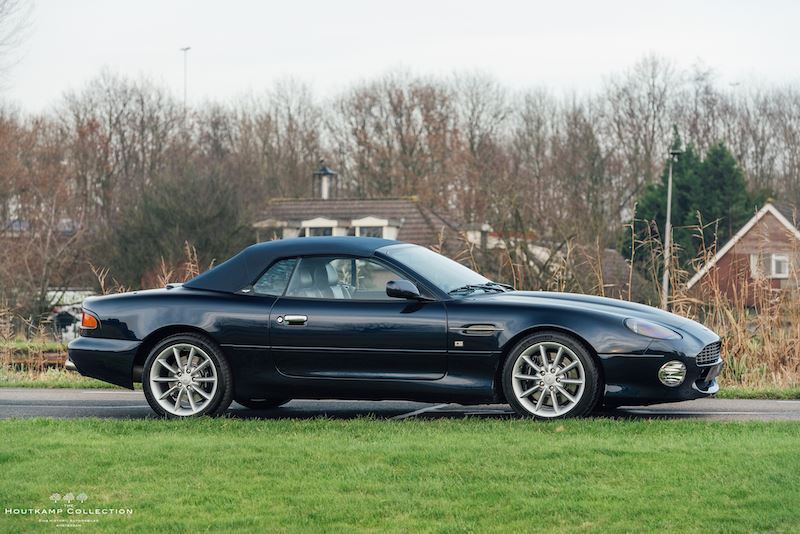 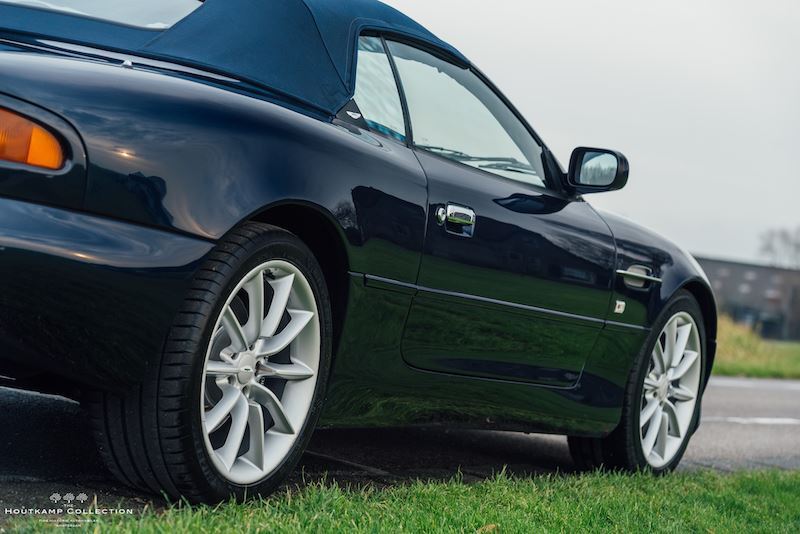 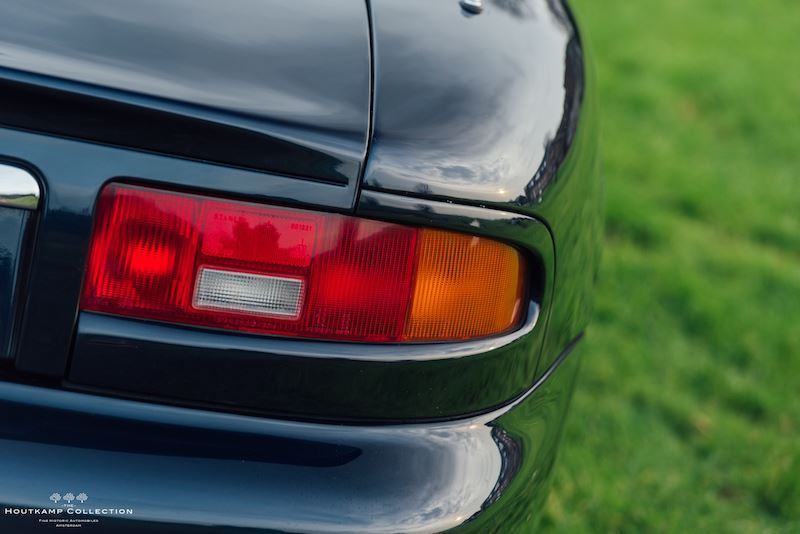 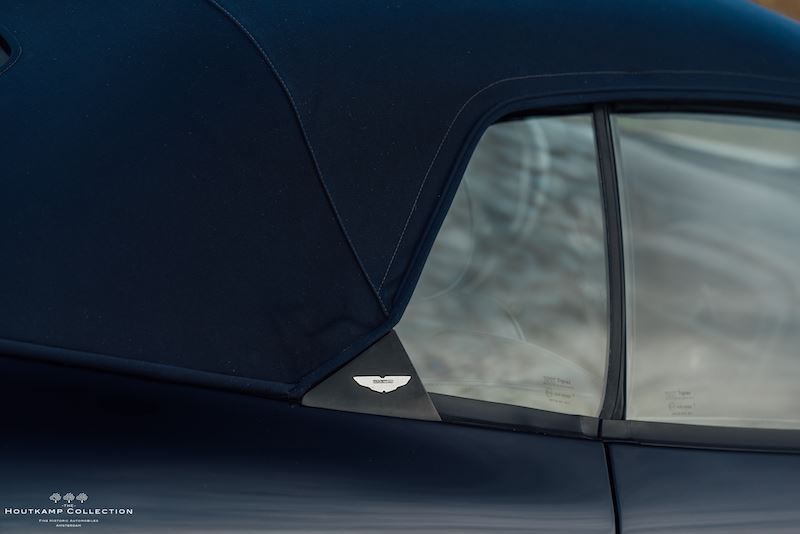 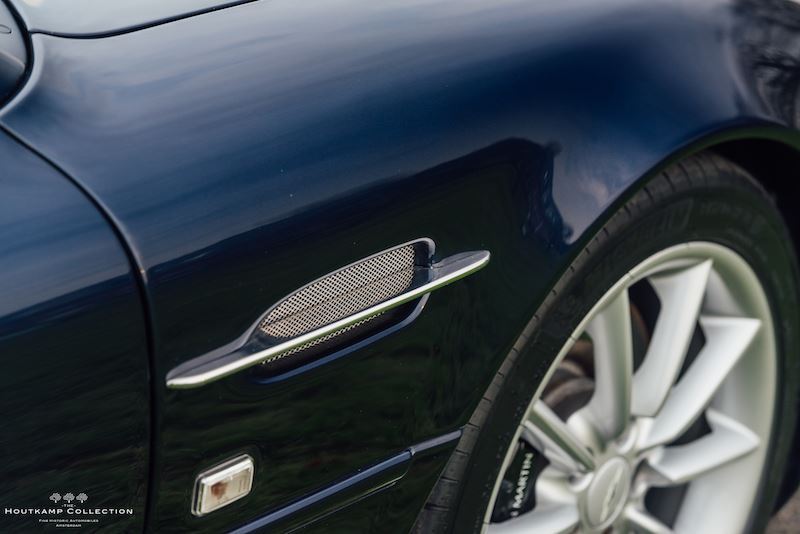 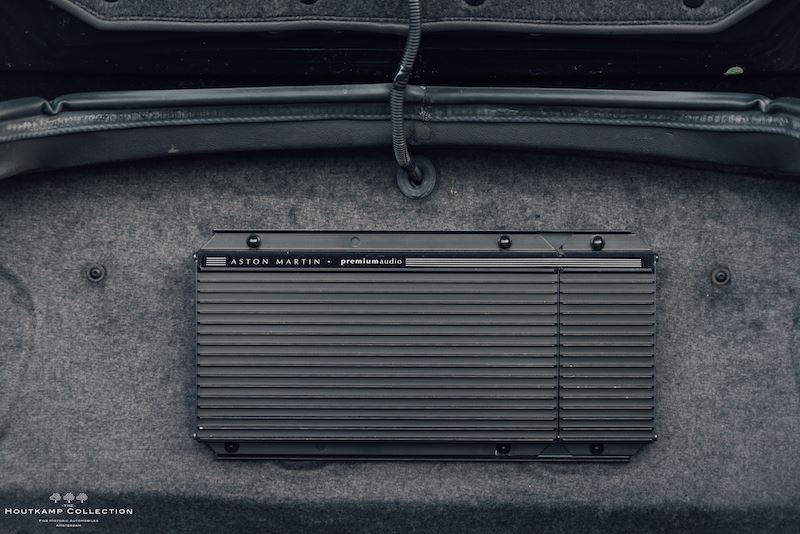 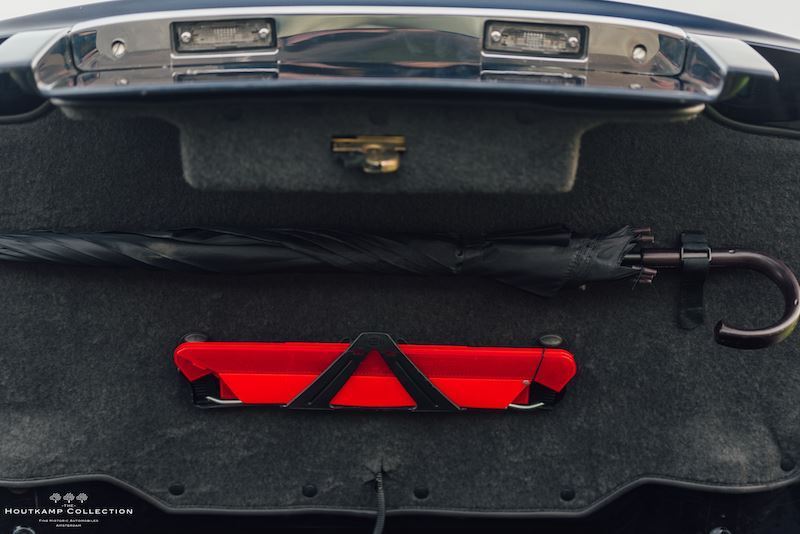 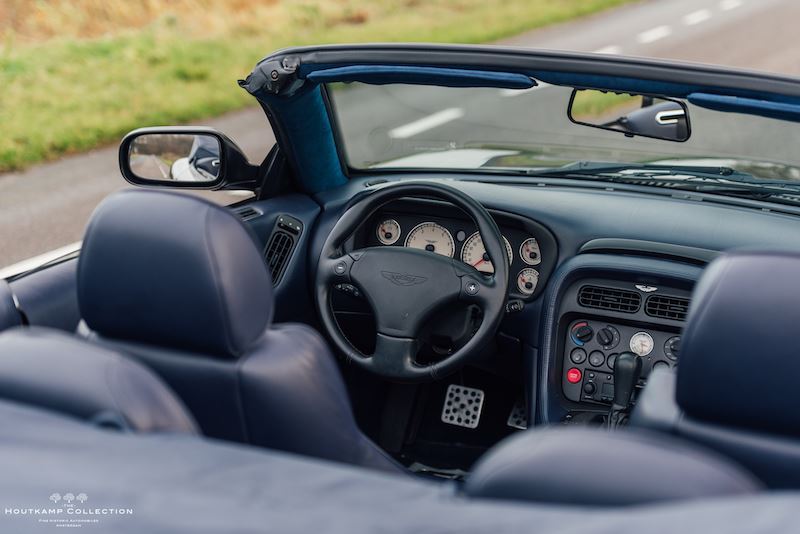 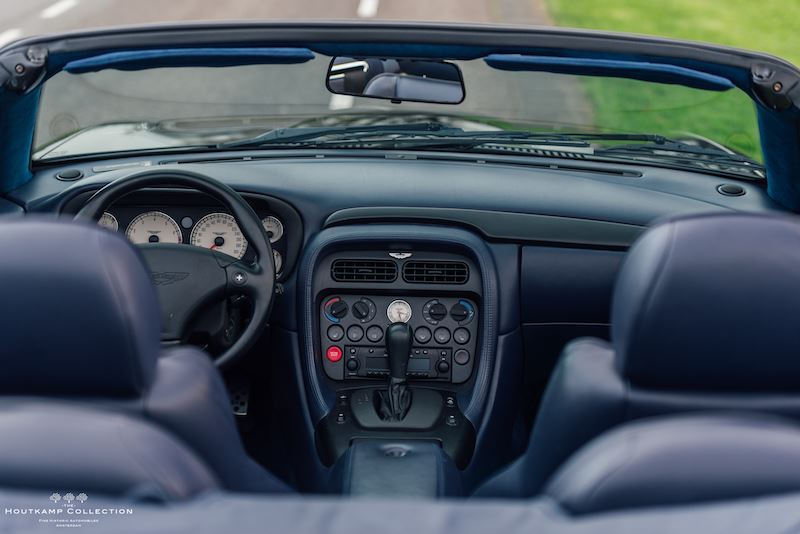 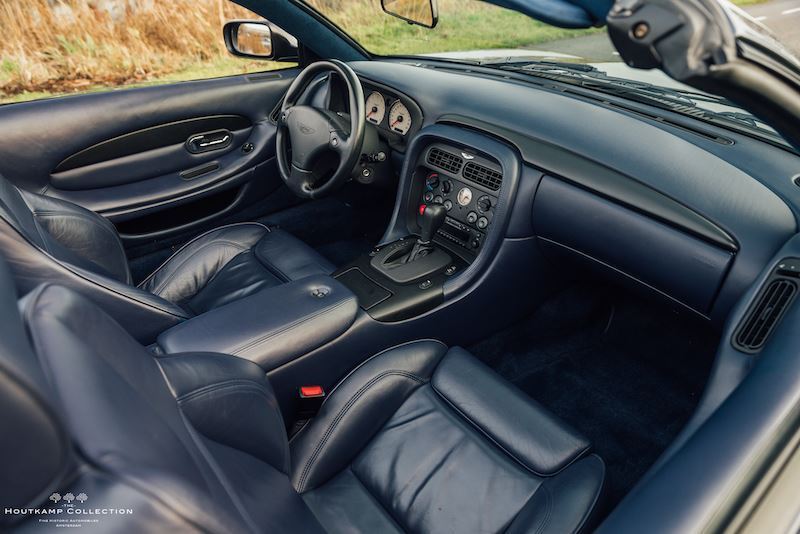 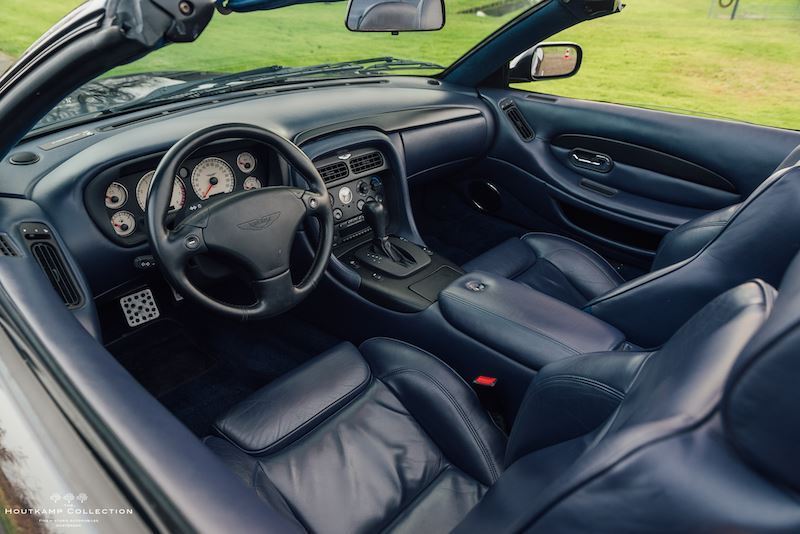 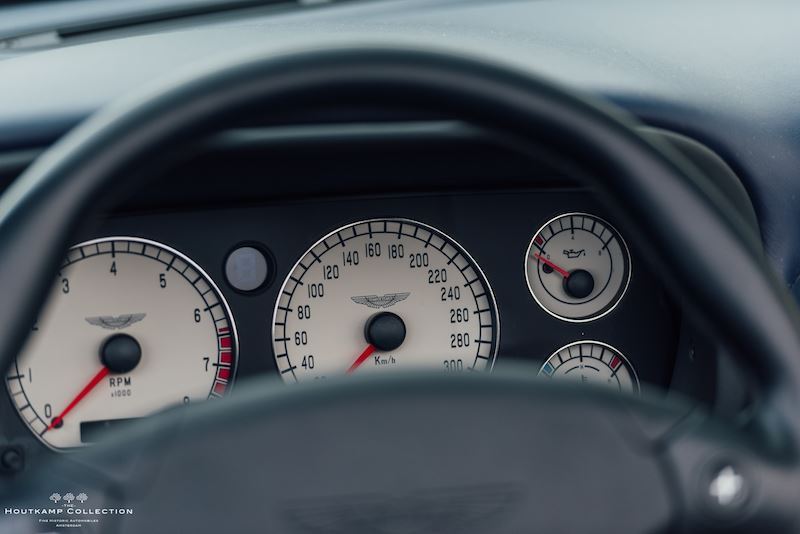 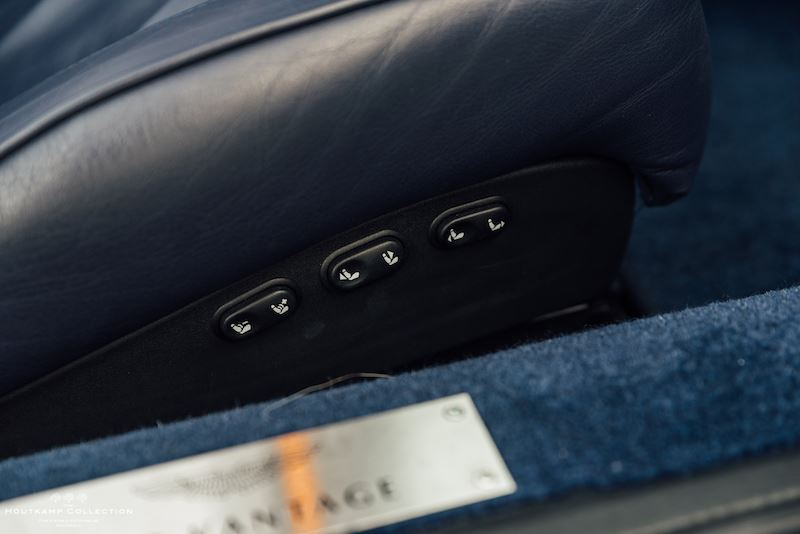 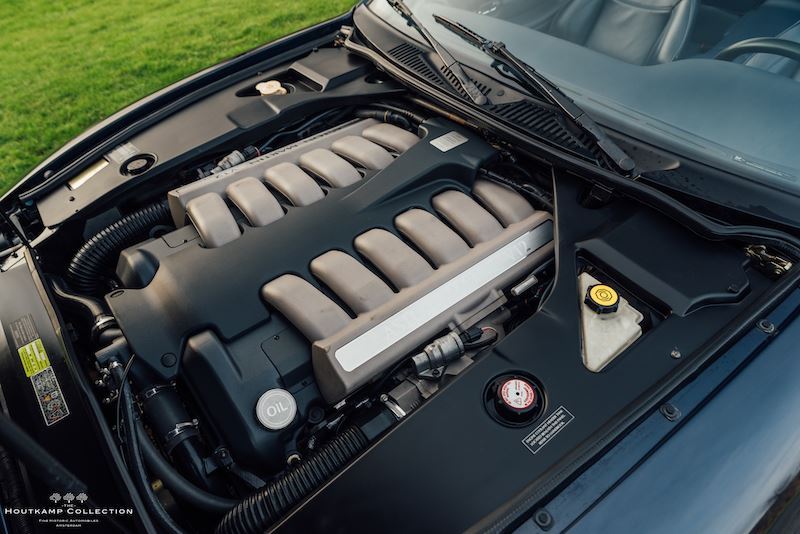 The DB7 series first came out in 1994 as a base series, positioned below the custom-built V8 Virage series. It shared some resources with the Jaguar XJS and also the Jaguar XJ220. However, the DB7 was surely a degree higher than Jaguar in terms of price and luxury quotient.
At the 1999 Geneva Auto Show, Aston Martin launched a top end version in the DB7 series, which became popular as the DB7 Vantage. This vehicle was in-production till 2004.

Building on the success of the in-line 6 cylinder DB7 the new Vantage models featured an all new 420bhp, 6.0 litre V12 engine, with a choice of 6 speed manual or 5 speed automatic gearbox.

In addition to the new powertrain the Vantage model had more aggressive styling, with a bigger front grille, new fog/side/indicator lights and imposing 18” wheels with Bridgestone S02 tyres.

This beautiful example is in a wonderful and impressive condition. It really is a collectors example in an absolute unique specification and condition. It has been very tastefully specified in a classic Antrim Blue with an extremely beautiful Pacific Blue interior.
The DB7 is newly delivered the 30th of June 2003.

The Aston has been newly ordered by a gentlemen who owned in his life a total of 8 DB7’s. This was his last DB7 and this was the car which he specified according to himself as the nicest DB7 ever.
On special request the headlining of the car has been made blue for example.
The interior has been specially ordered with even a blue carpet.

It is clear that the former owner is an absolute Aston Martin enthousiast and he didn’t take normal care for his car(s) but extreme care.
Therefore this Aston Martin is absolutely superb maintained with all invoices on file.

The car was newly delivered in Switzerland where the owner was living before he moved to Monaco.

At a certain moment, somewhere in 2017 the former owner decided to sell the car to a good friend who wanted to buy the car for his wife.
The lady actually never drove the car and the former owner bought the car back some months later for an amount of CHF 58.700,- CHF. He decided at that time to import the car into Europe so that it could be registered on his Monaco house which resulted in the fact that an amount of € 10.708,- on import tax had to be paid.

To keep the car in it’s superbe technical condition the owner went tot Aston Martin in Switzerland and spend almost 17.000,- CHF on the car for checks and maintenance. Was this needed, it seems not but if a car needs to be in perfect condition, then it is good to keep her in perfect condition.

So the Aston has been regularly and superbly maintained during it’s lift.

It is a car which had 2 owners whereby all history is known.

It is by far the most impressive, beautiful and best driving DB7 we have ever traded. We can just describe it as an absolute amazing car.

We personally love the DB7 and know also it’s weaknesses. 1 of them is for example the center cap of the wheels. For some reason they are always damaged due to aging. But this car looks also in these sort of details as new.

The grille, front bumper, doors, boot. Everything is in as new condition.

The Aston is complete with the Aston Martin EC Certificate of Conformity.

The seats as well as the complete interior is in an as new condition. It is very very clearly visible on the interior that this car has been only owned by an absolute car enthusiast who takes a lot of car for his possessions.

The interior of the DB7 is as pleasing to the eye as the exterior. The shape of the interior was designed by Scottish designer Ian Callum and has been hailed as the best looking British car since the Jaguar E-type.

It’s as if the stylist has taken the classic Aston shape and smoothed off the sharp edges; the result is very elegant.

Standard the DB7 has a walnut trim in the cockpit but on special request of the former owner it has been made black which suits the car very well.

We have never seen such a nice interior in an Aston Martin DB7. This is mainly because of the high quality of the leather which is used in these cars. The high quality leather which is used is very nice but also gets very quickly damaged because of the softness of the leather. Compare the seats with very expensive men shoes. The more expensive they are, the more soft the leather but the quicker they are damaged.
This interior is completely as new without any signs of wearing.

This is absolutely unique!

We do know that a variety of DB7’s can be found for sale but we have not been able to find a car in such a beautiful condition. This is an extremely beautiful example, color wise, condition wise and history wise.