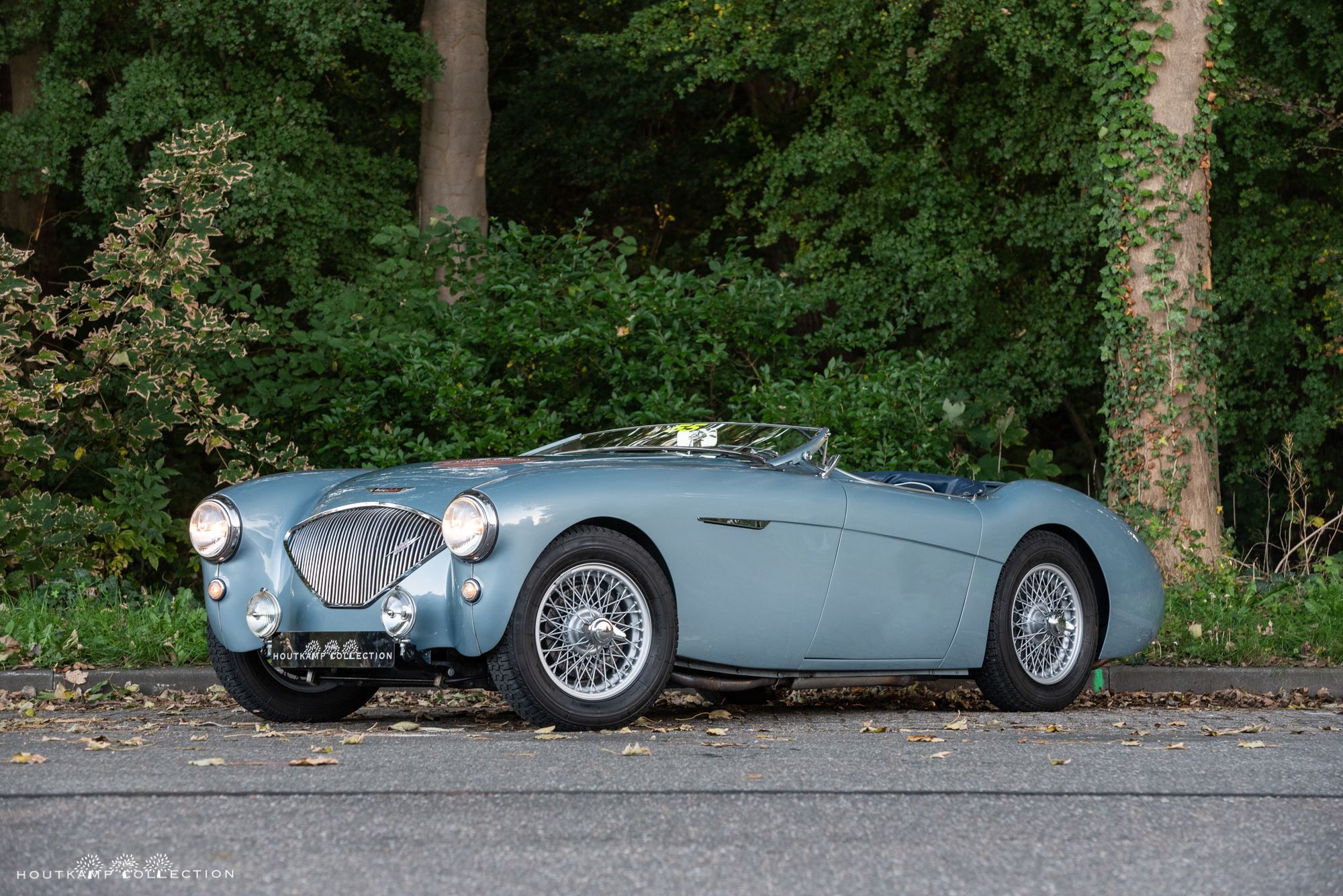 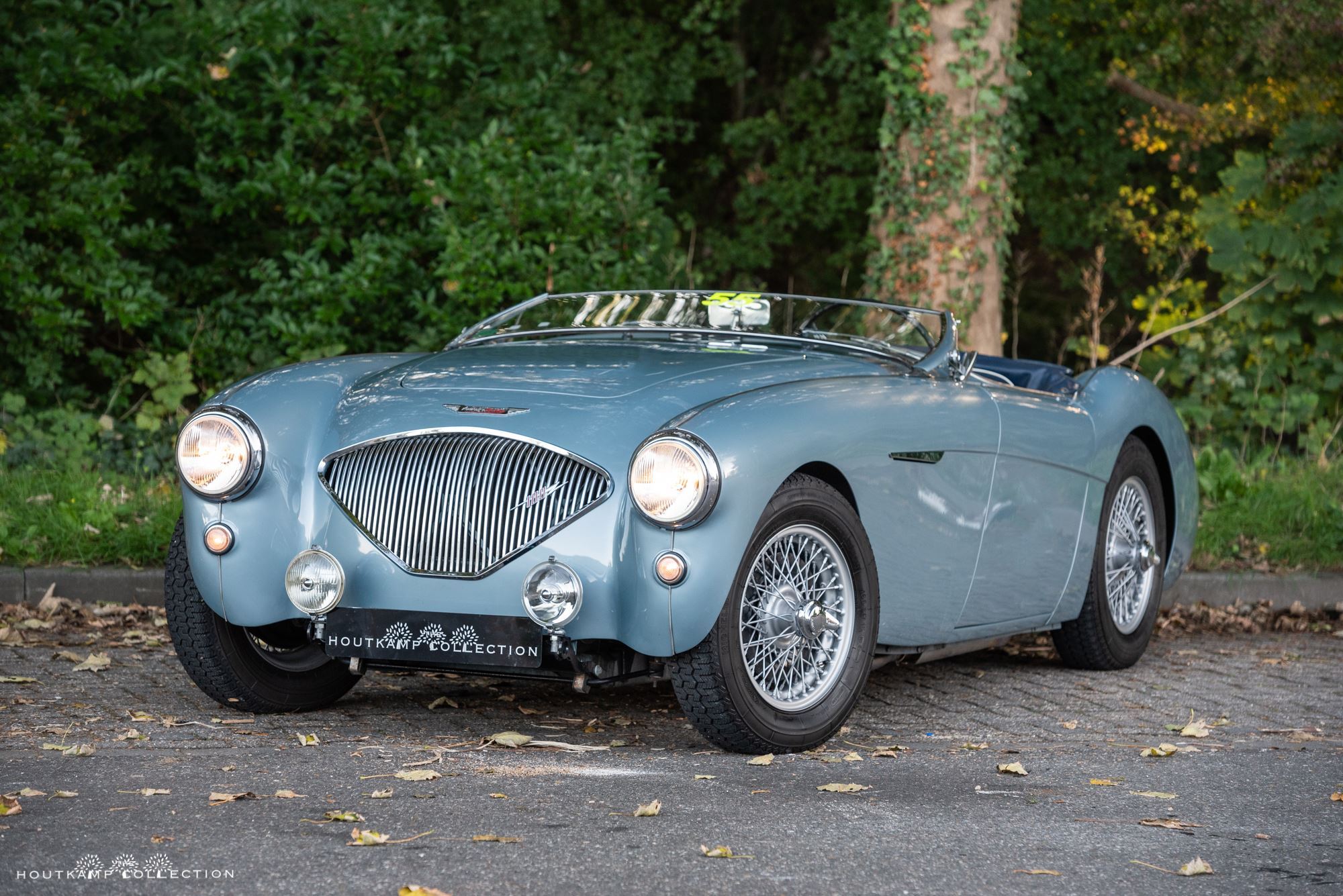 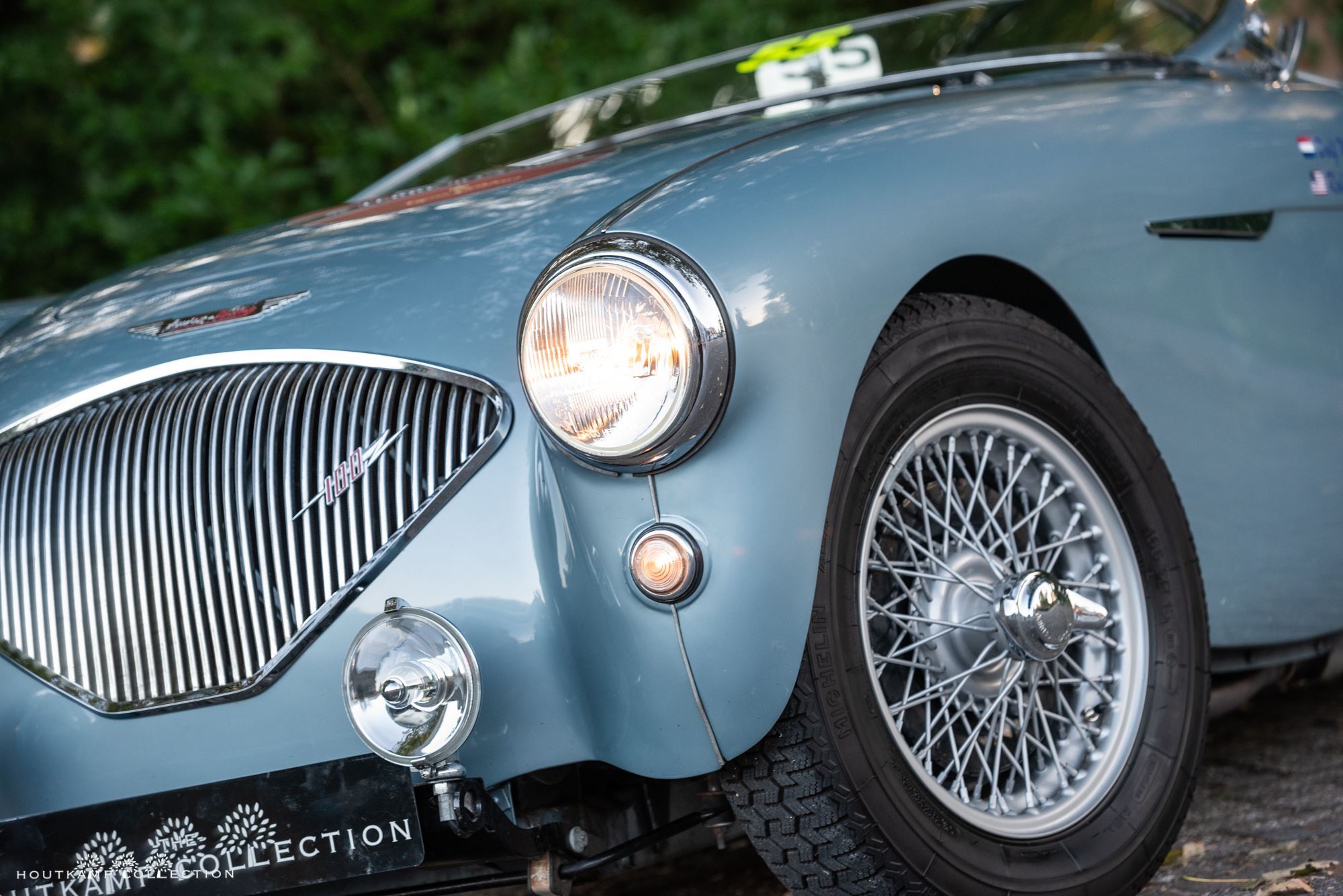 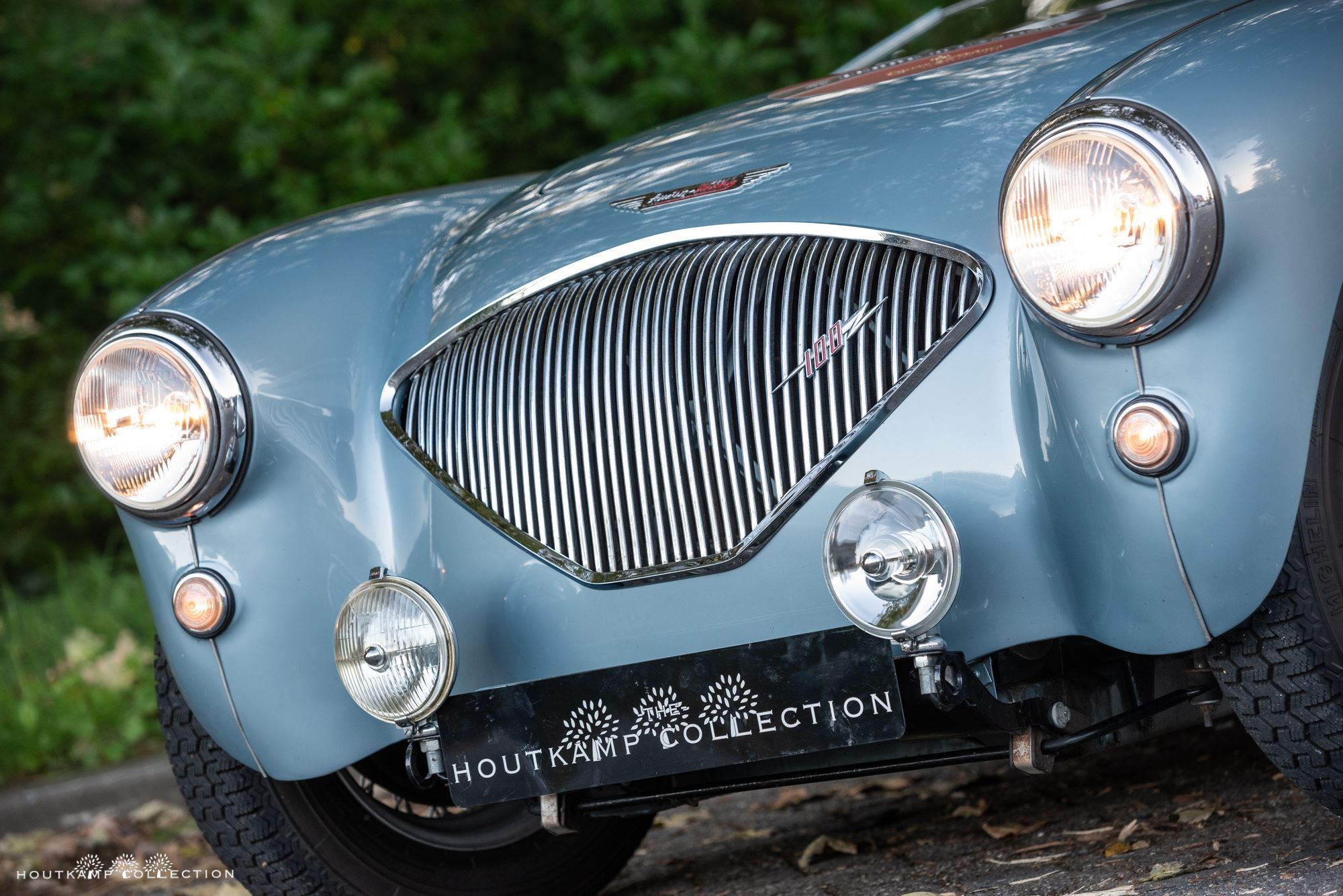 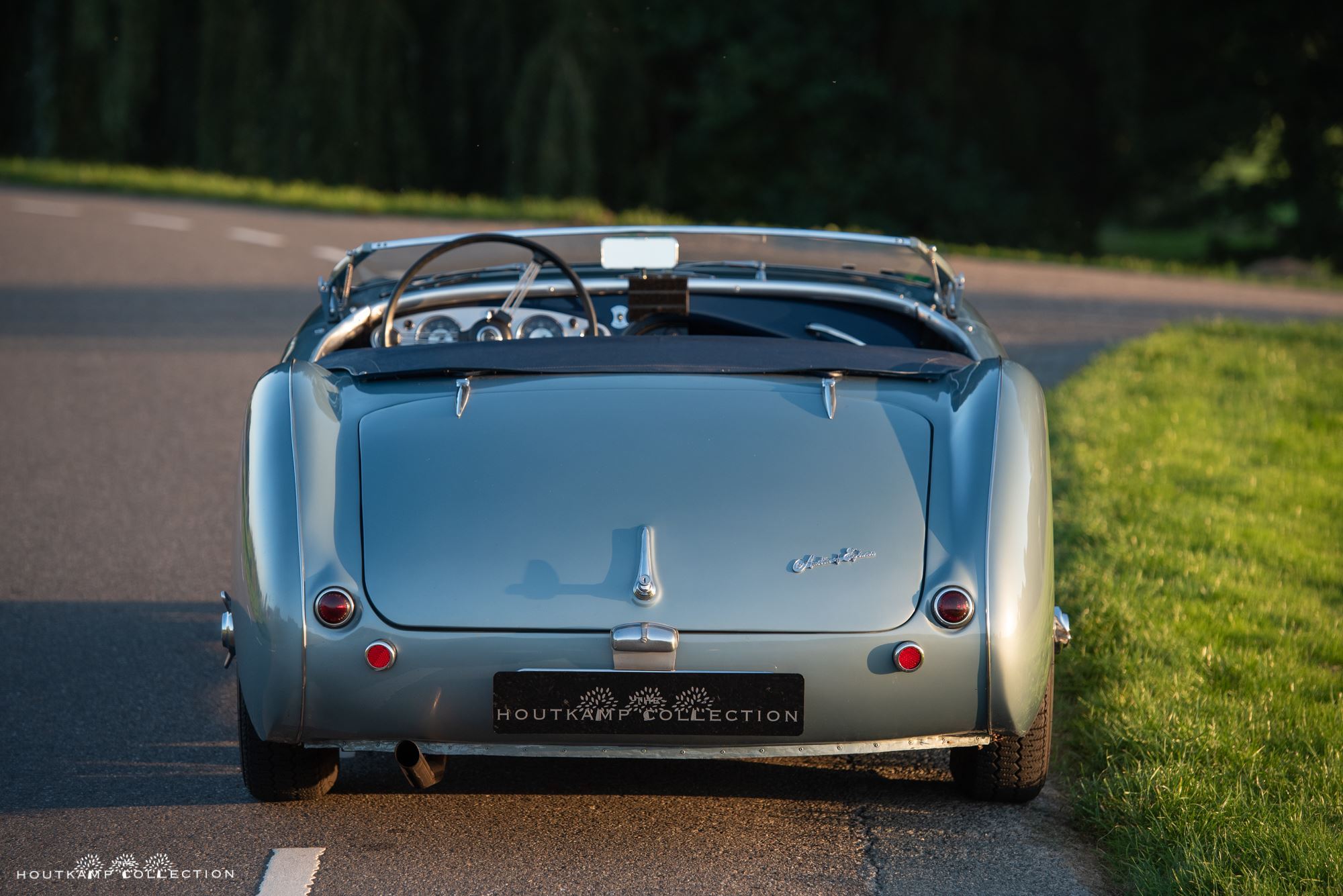 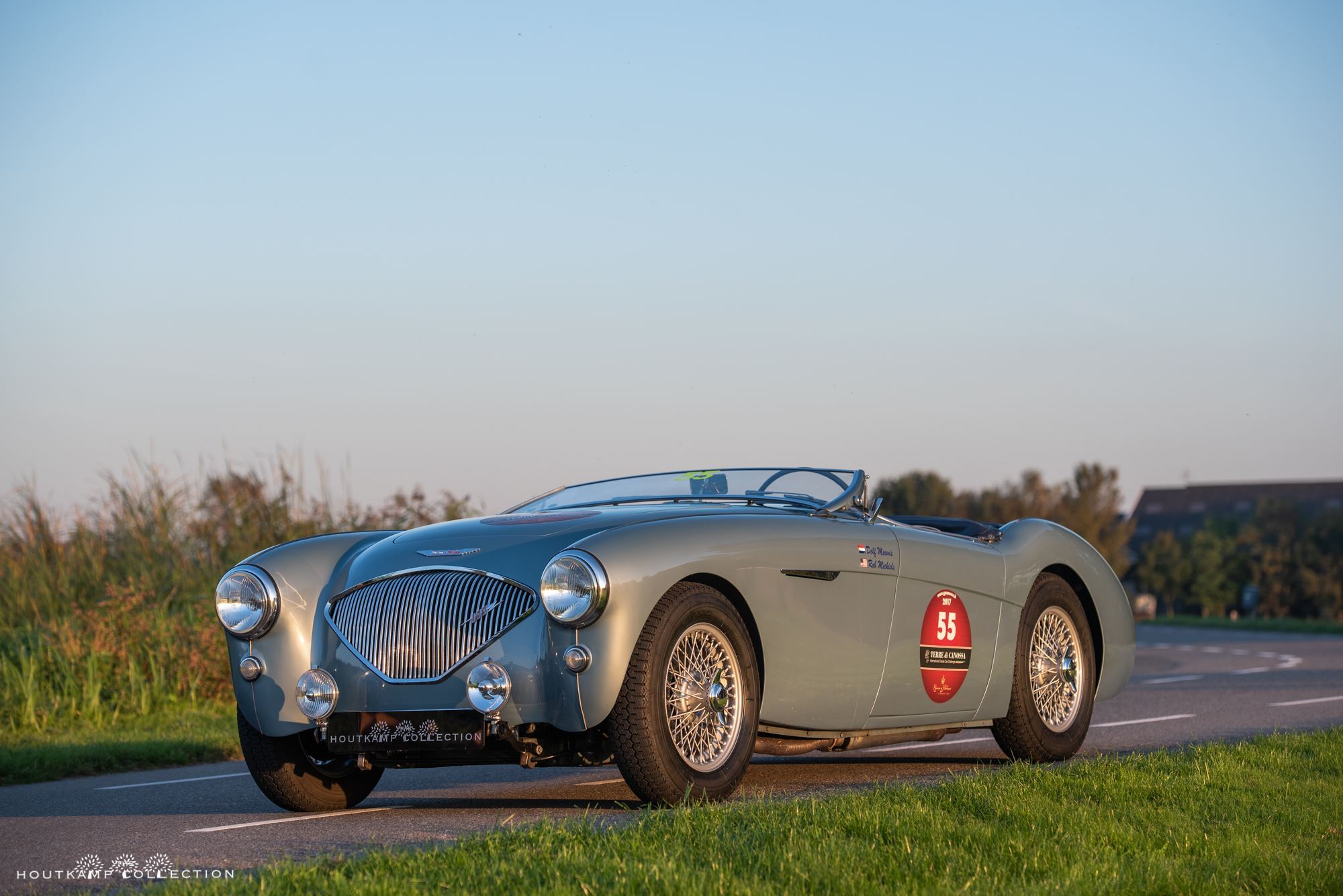 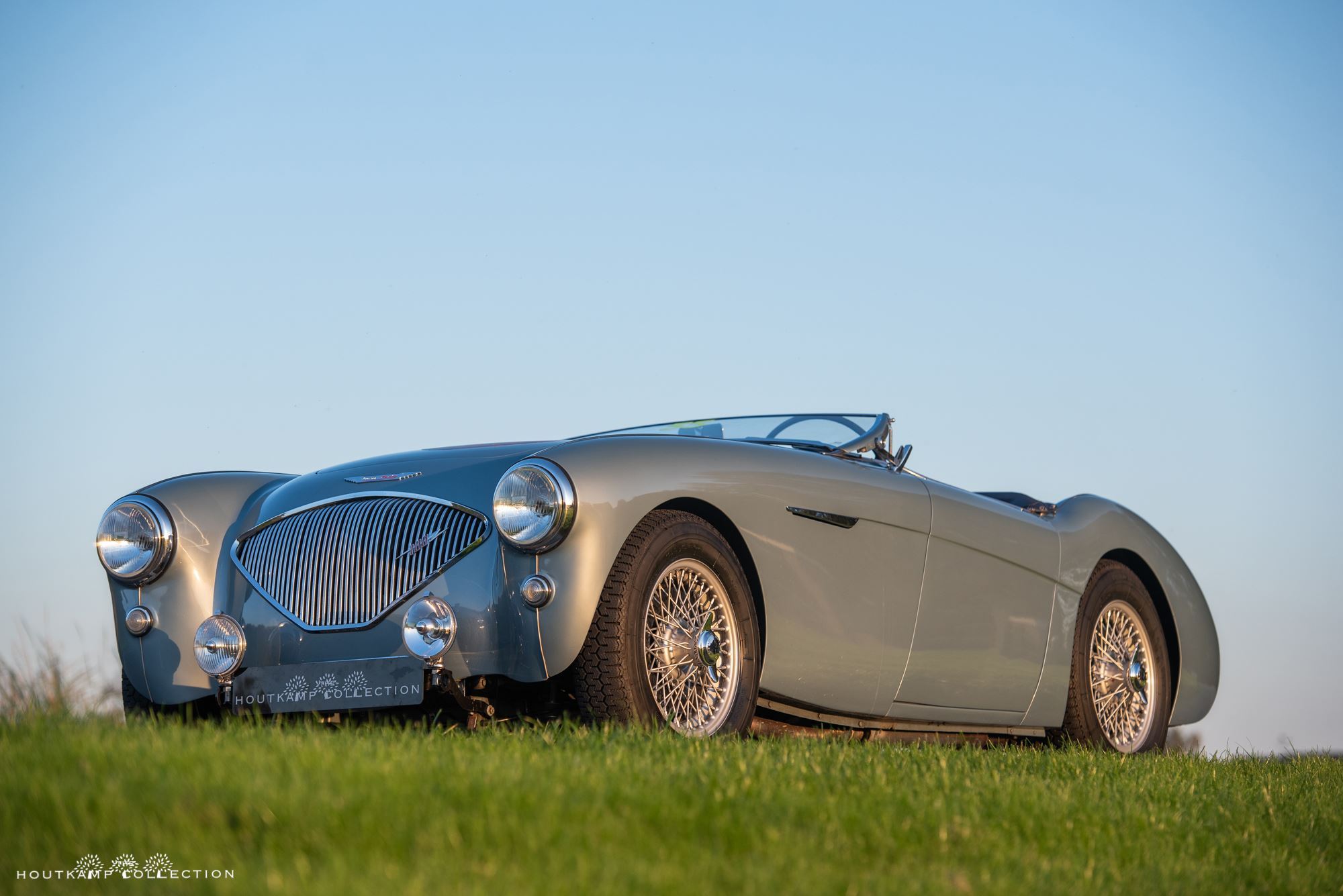 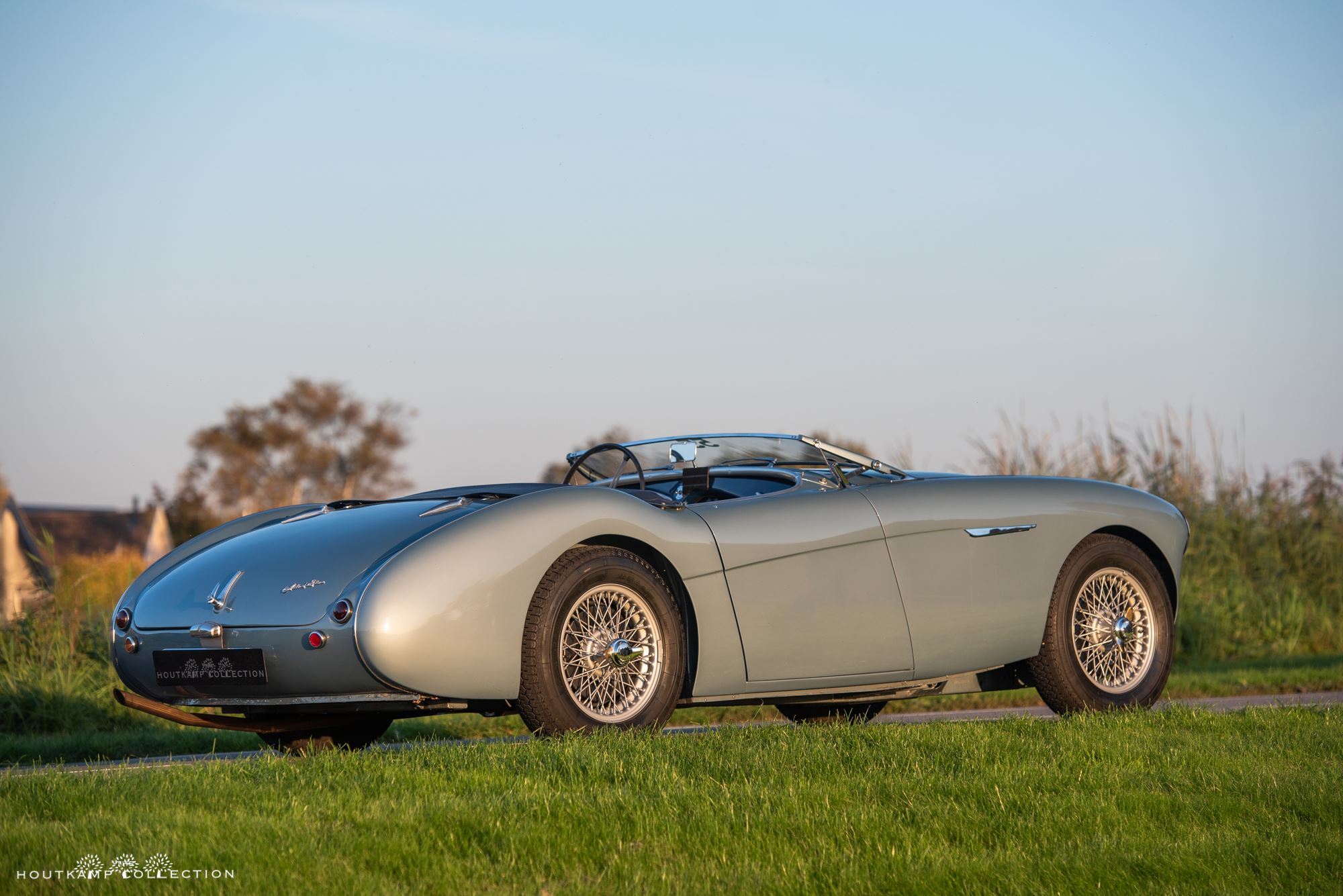 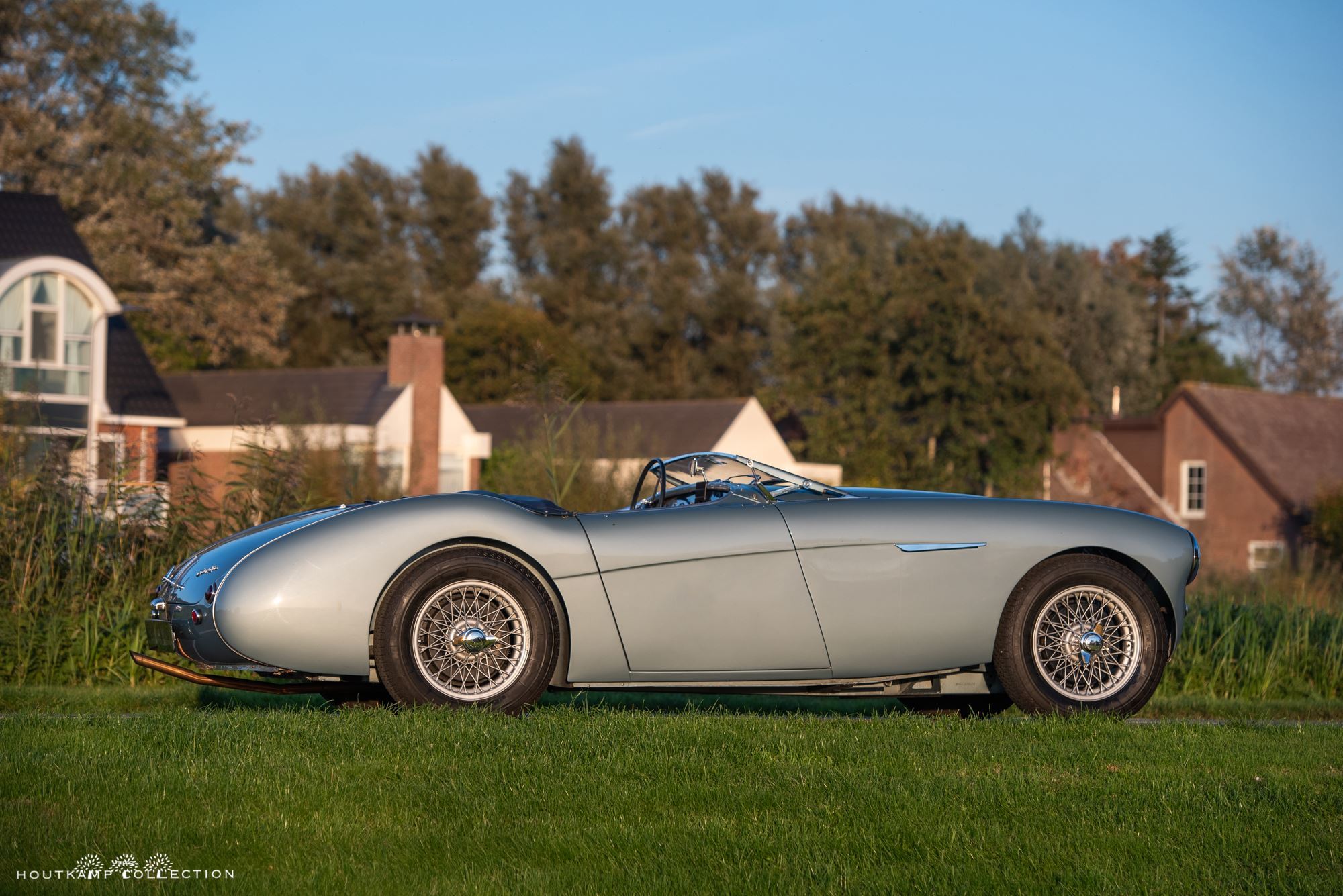 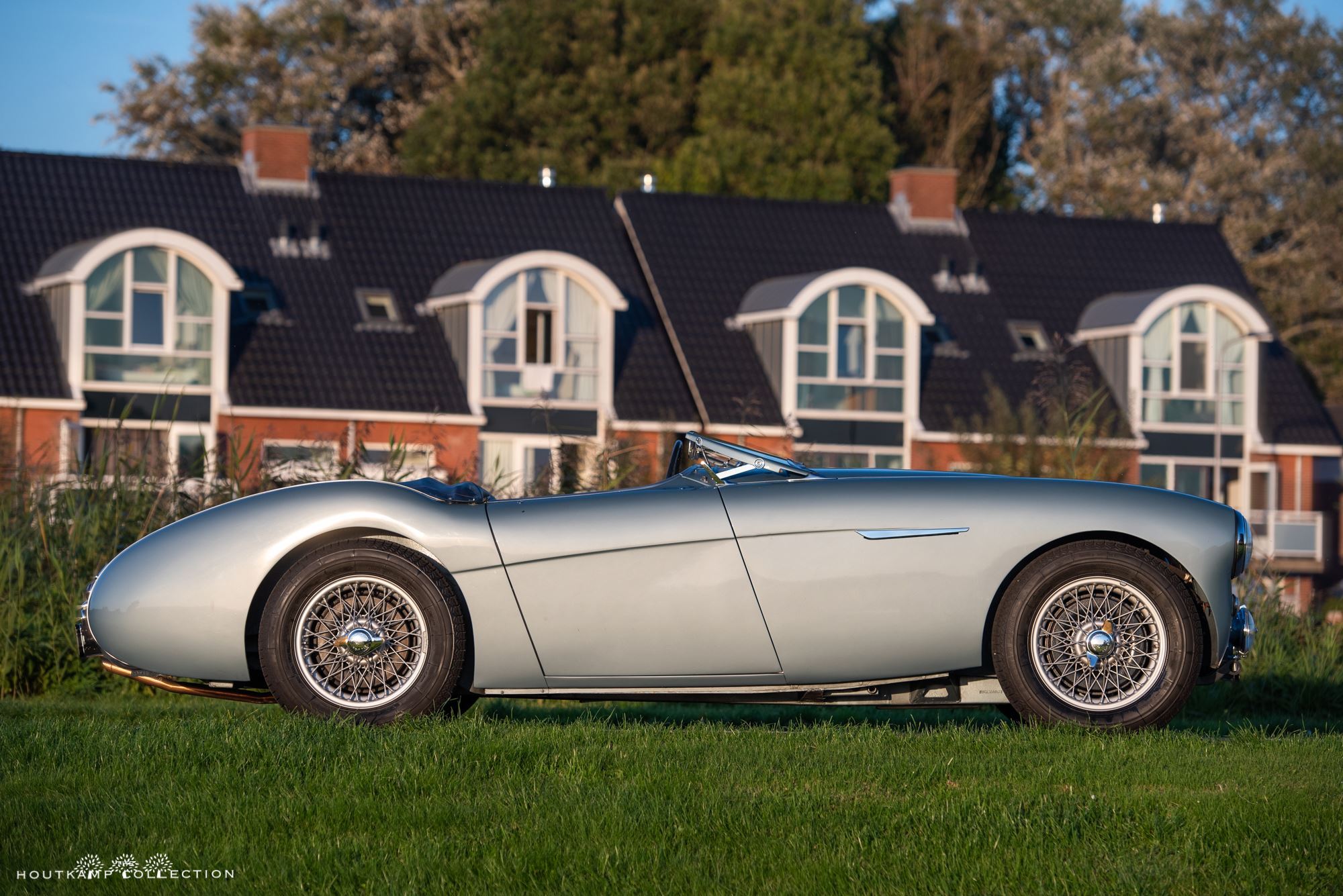 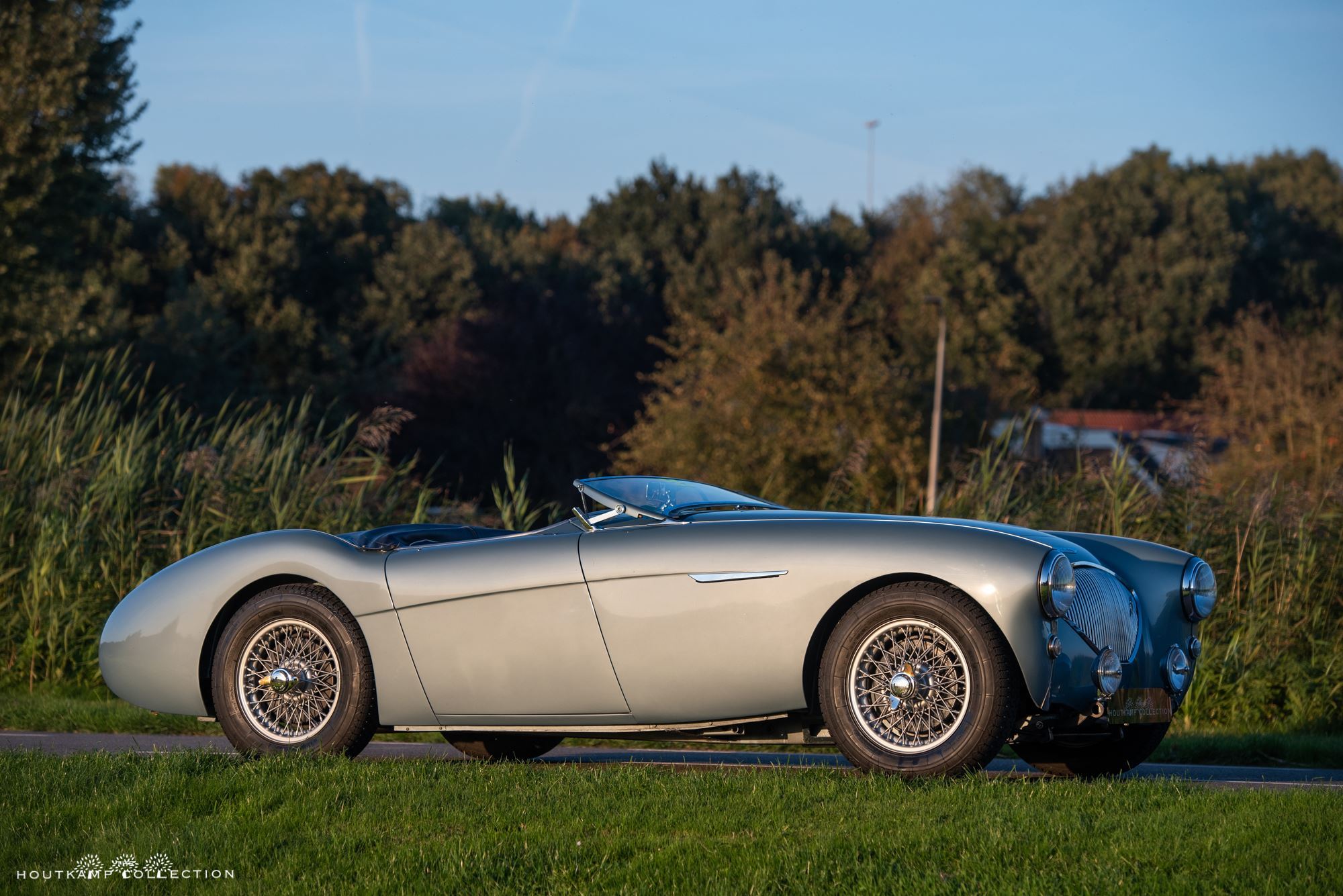 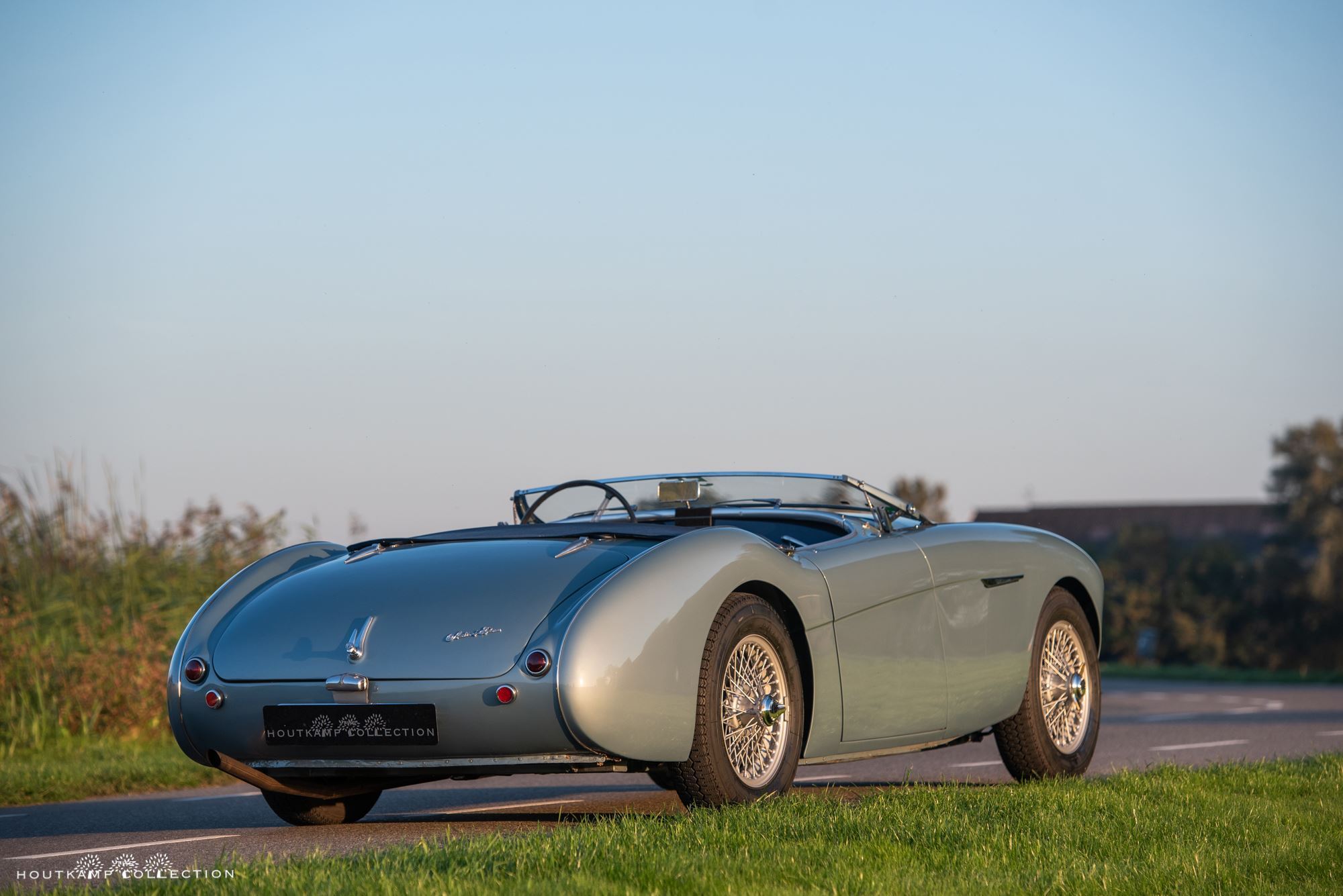 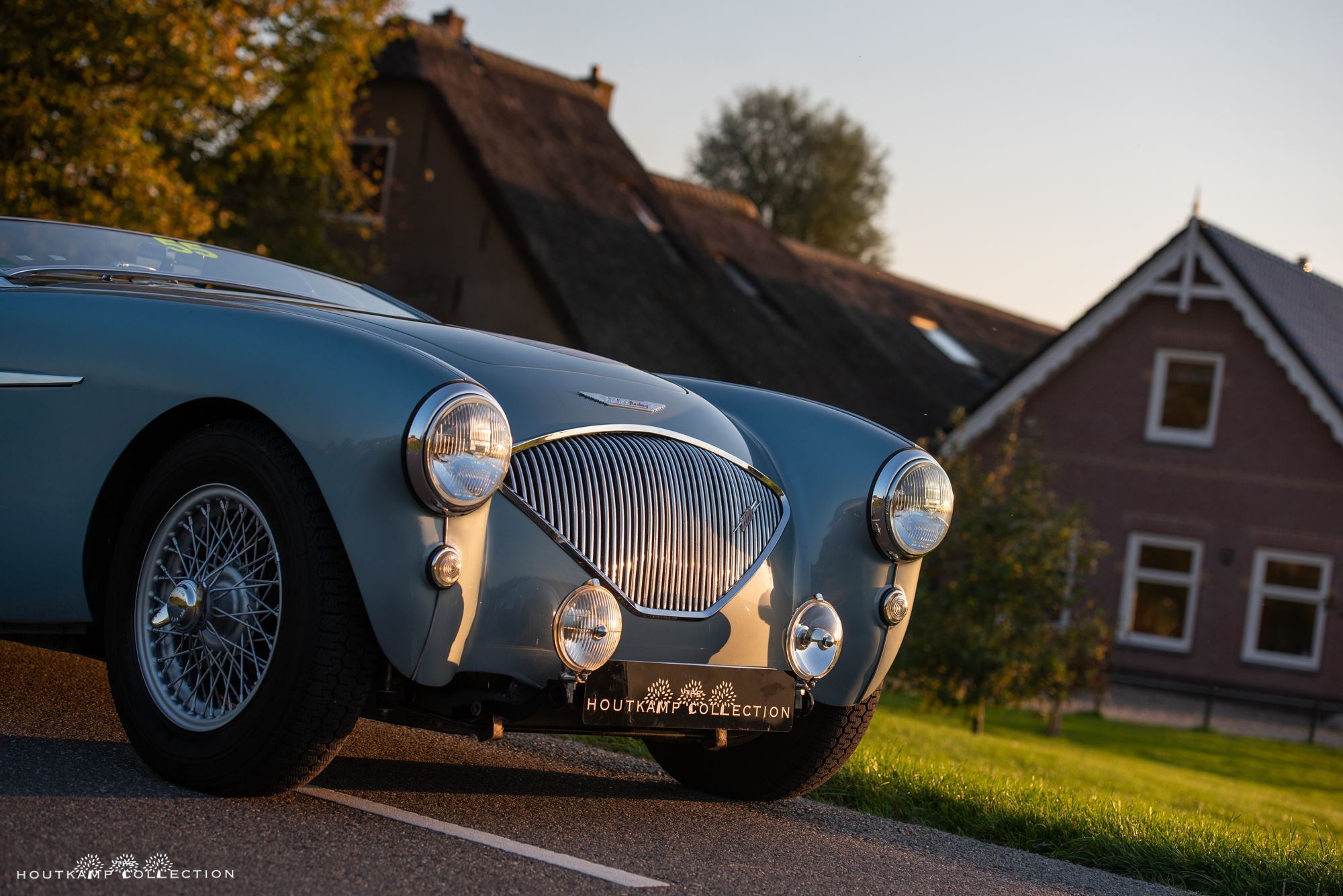 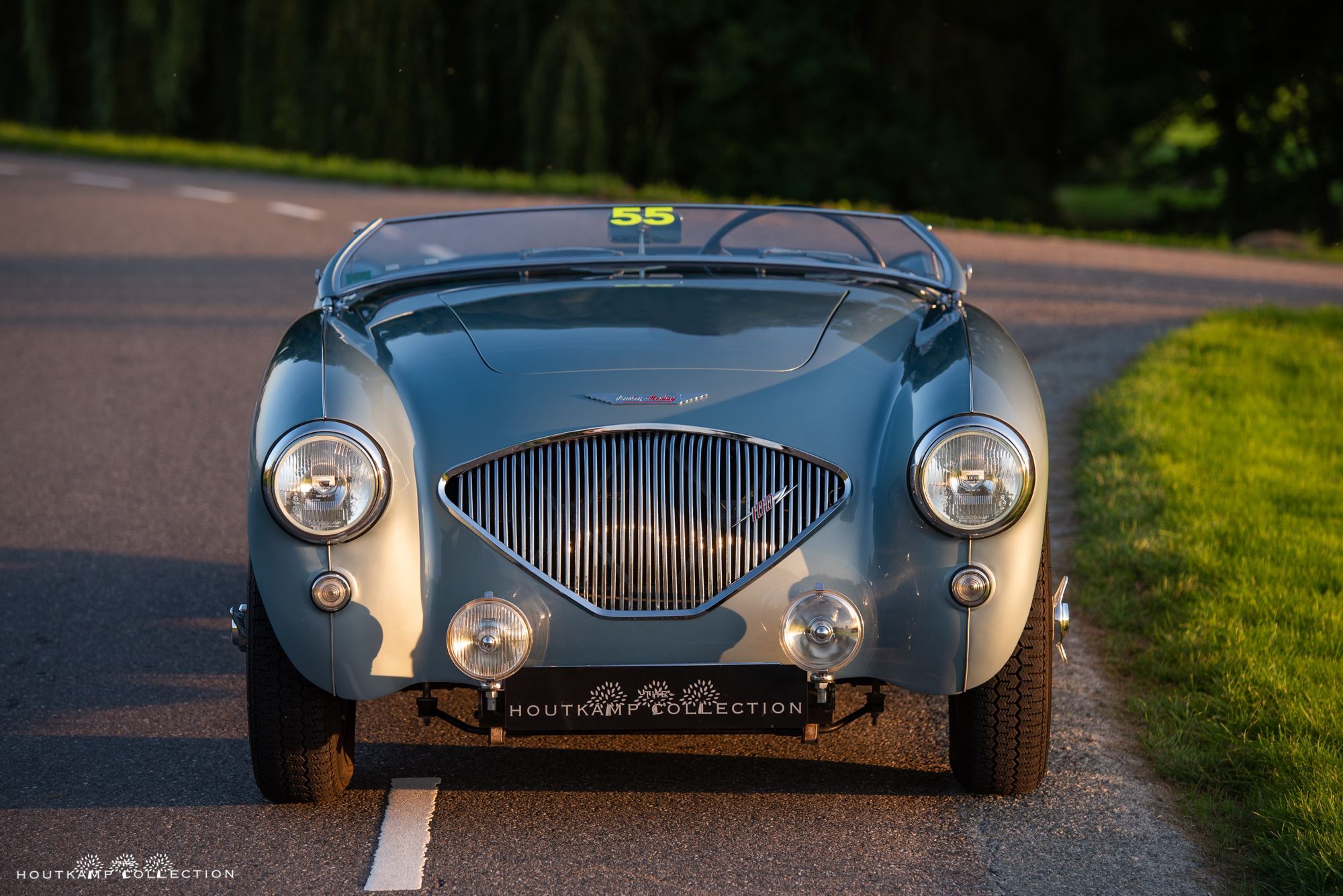 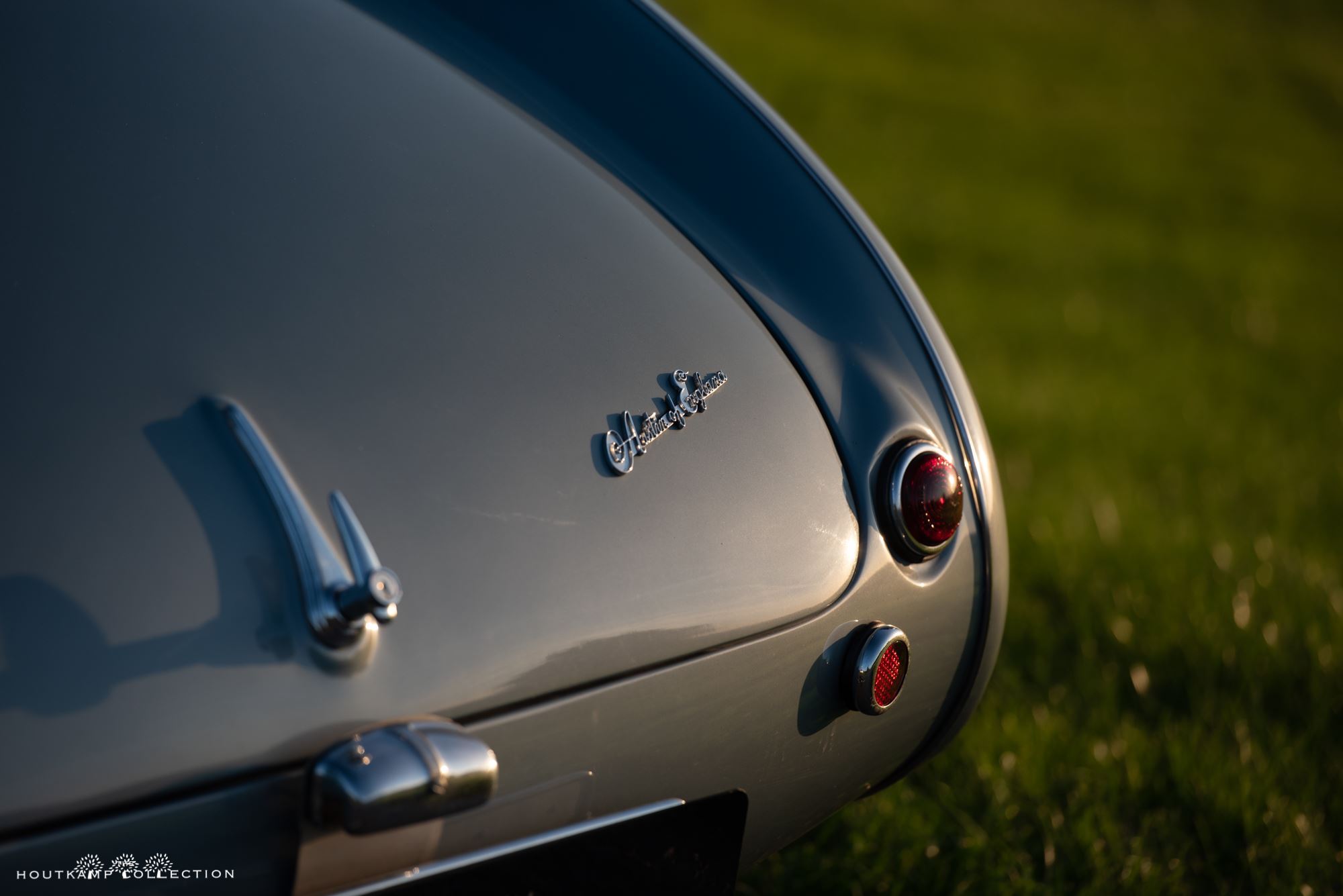 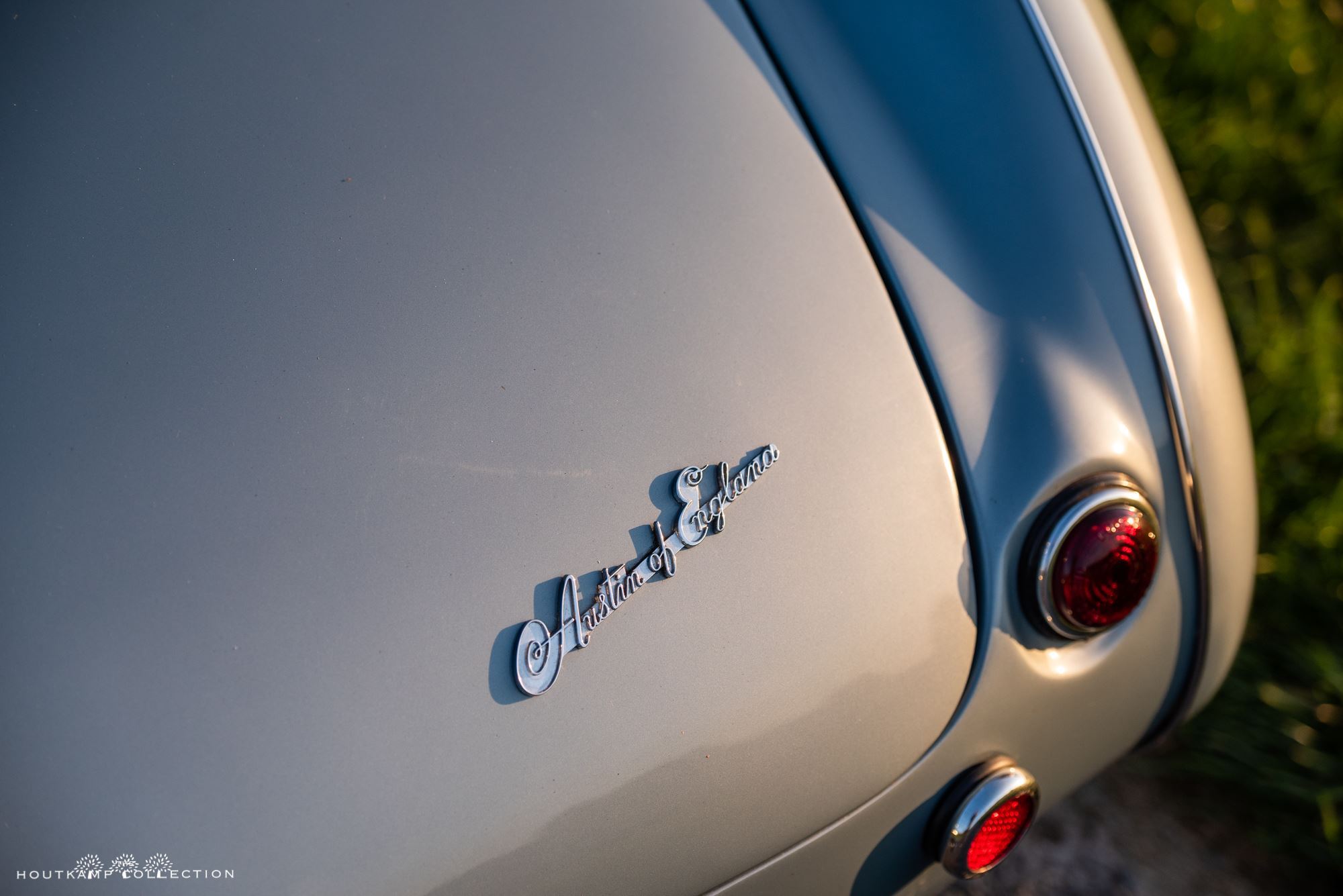 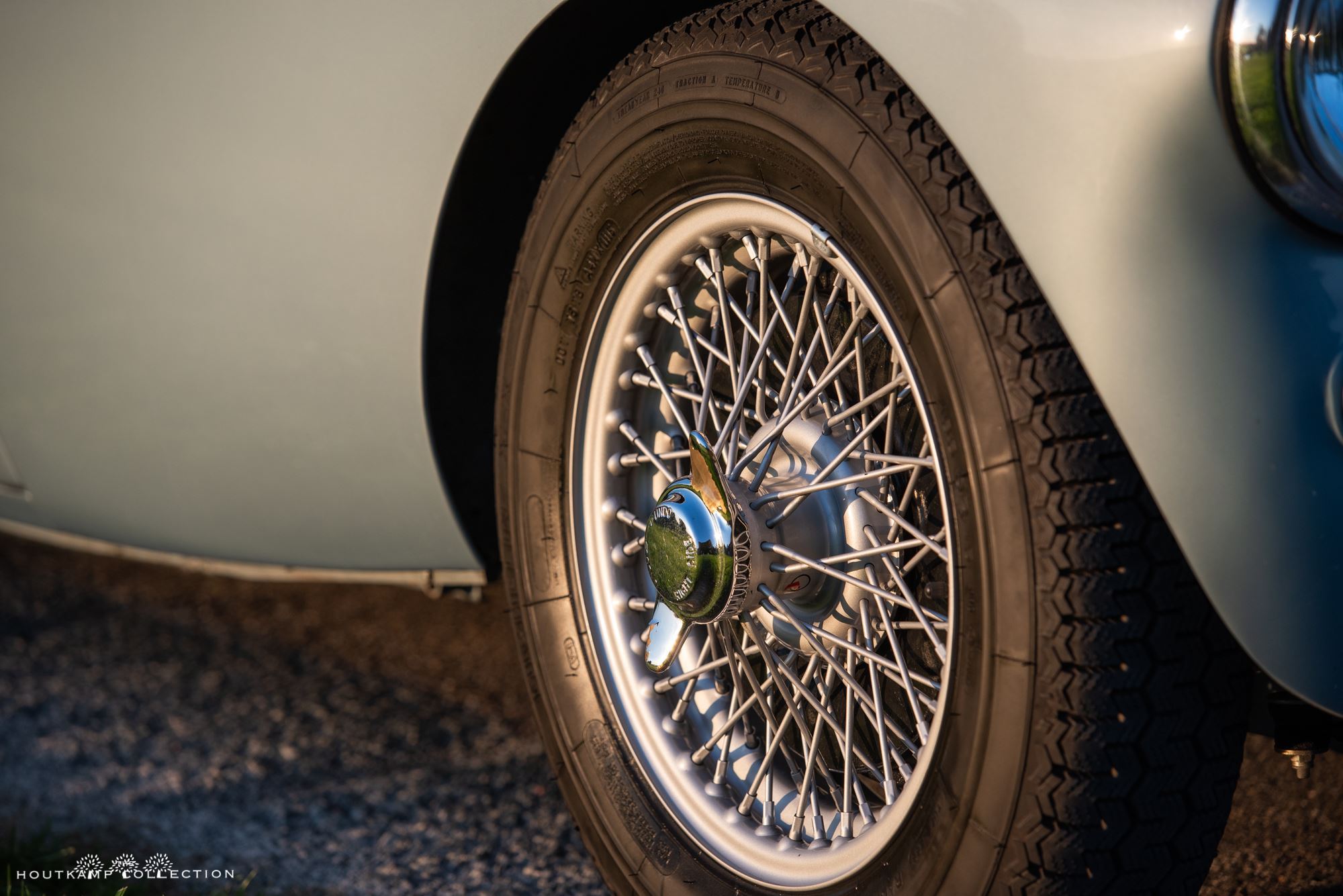 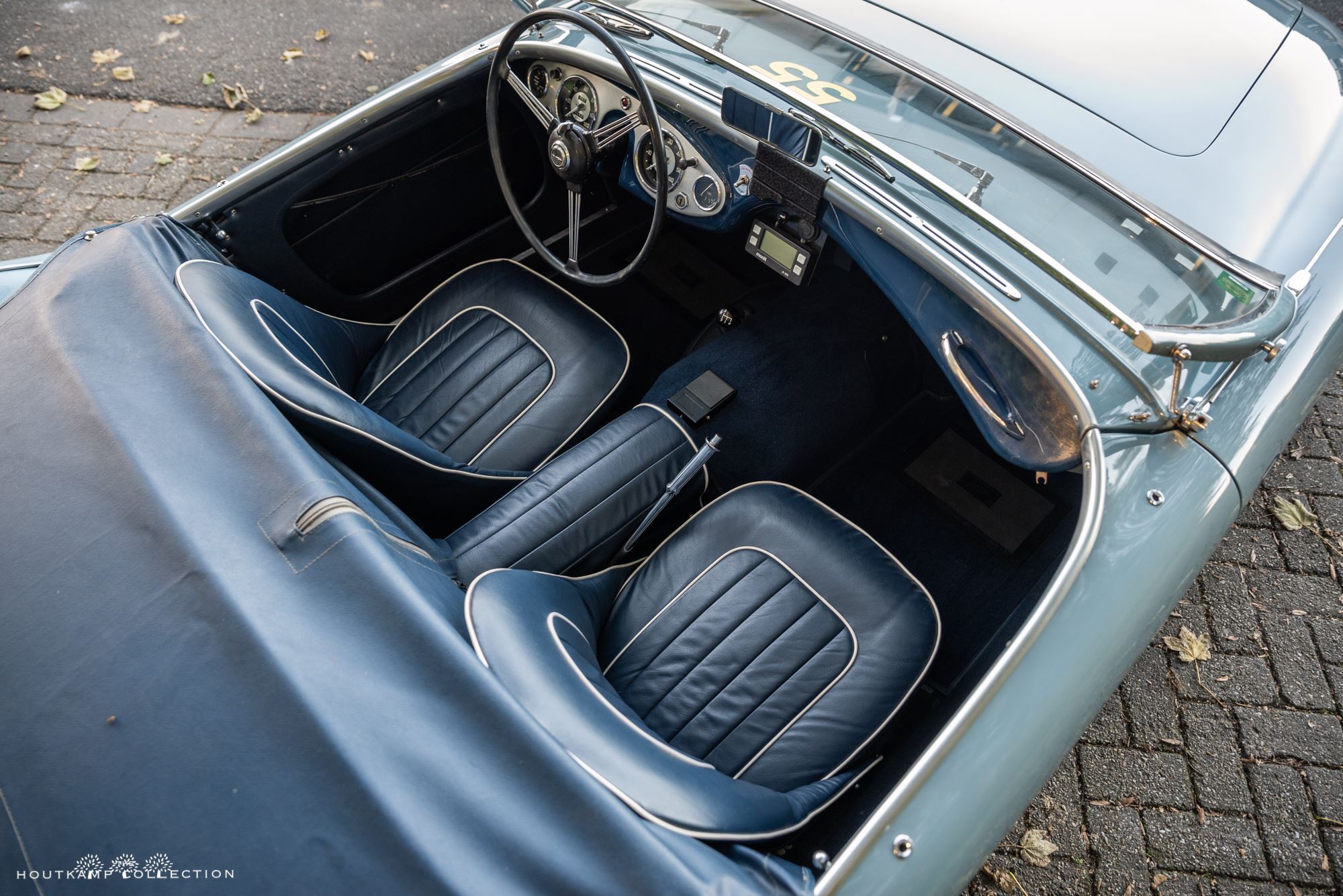 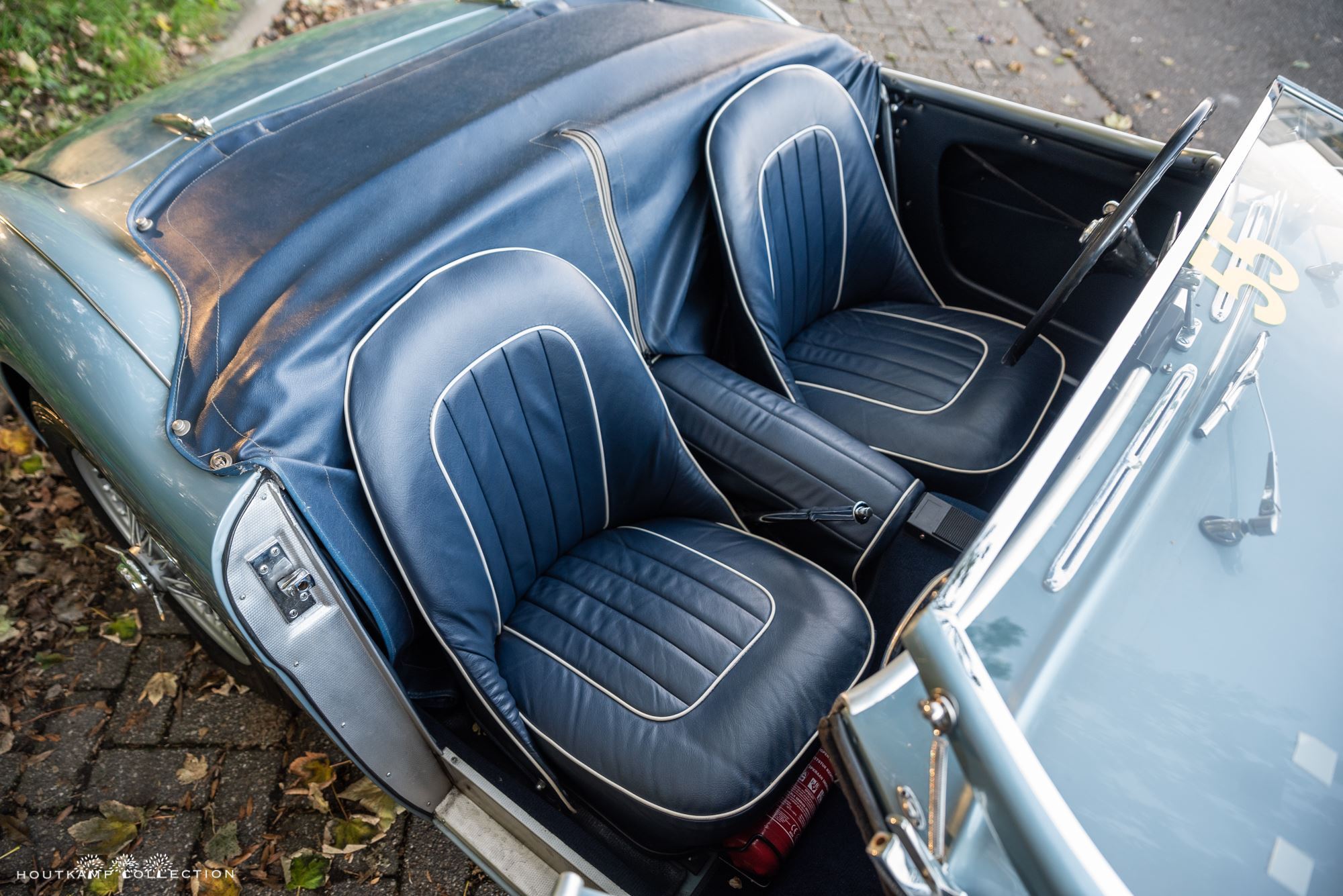 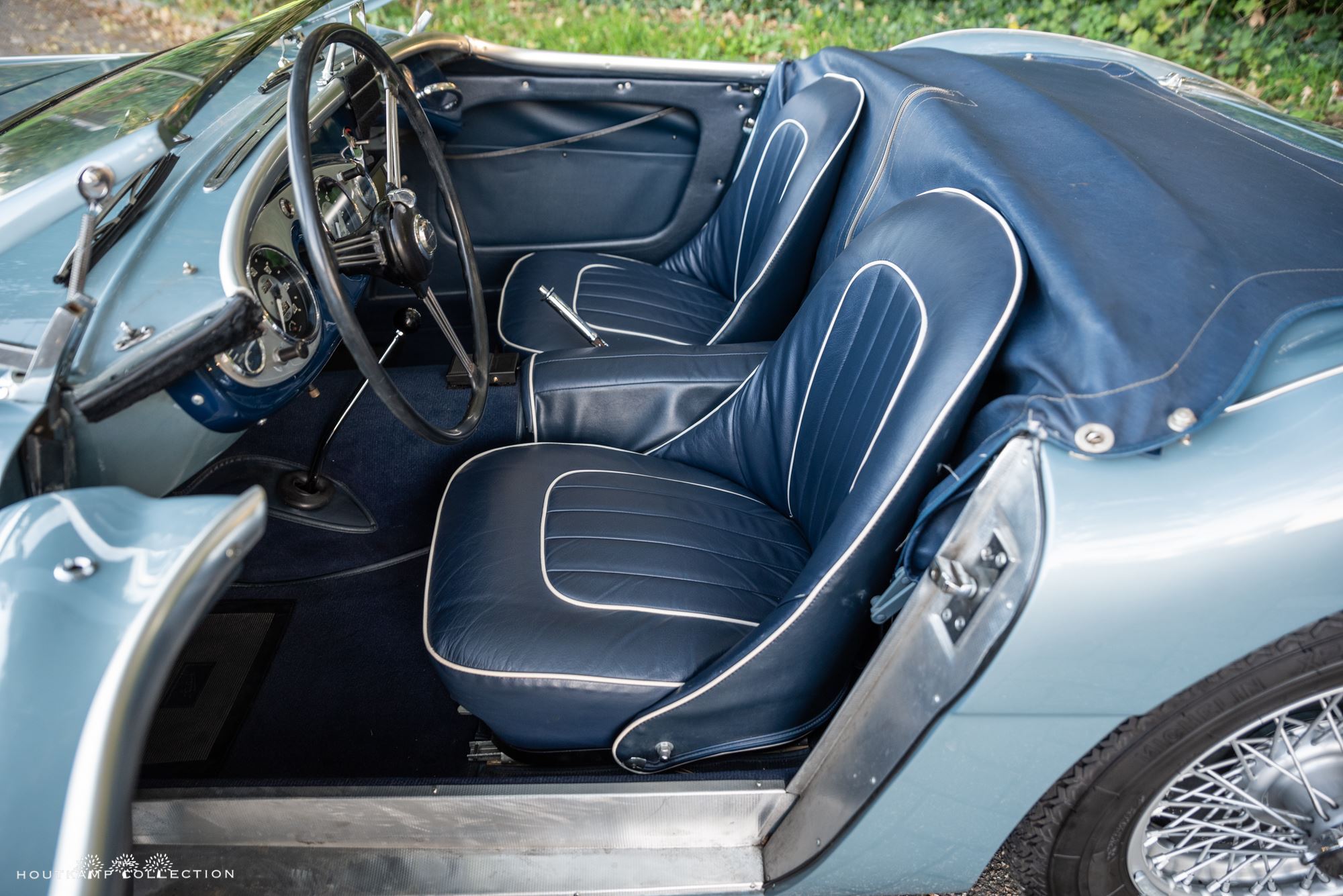 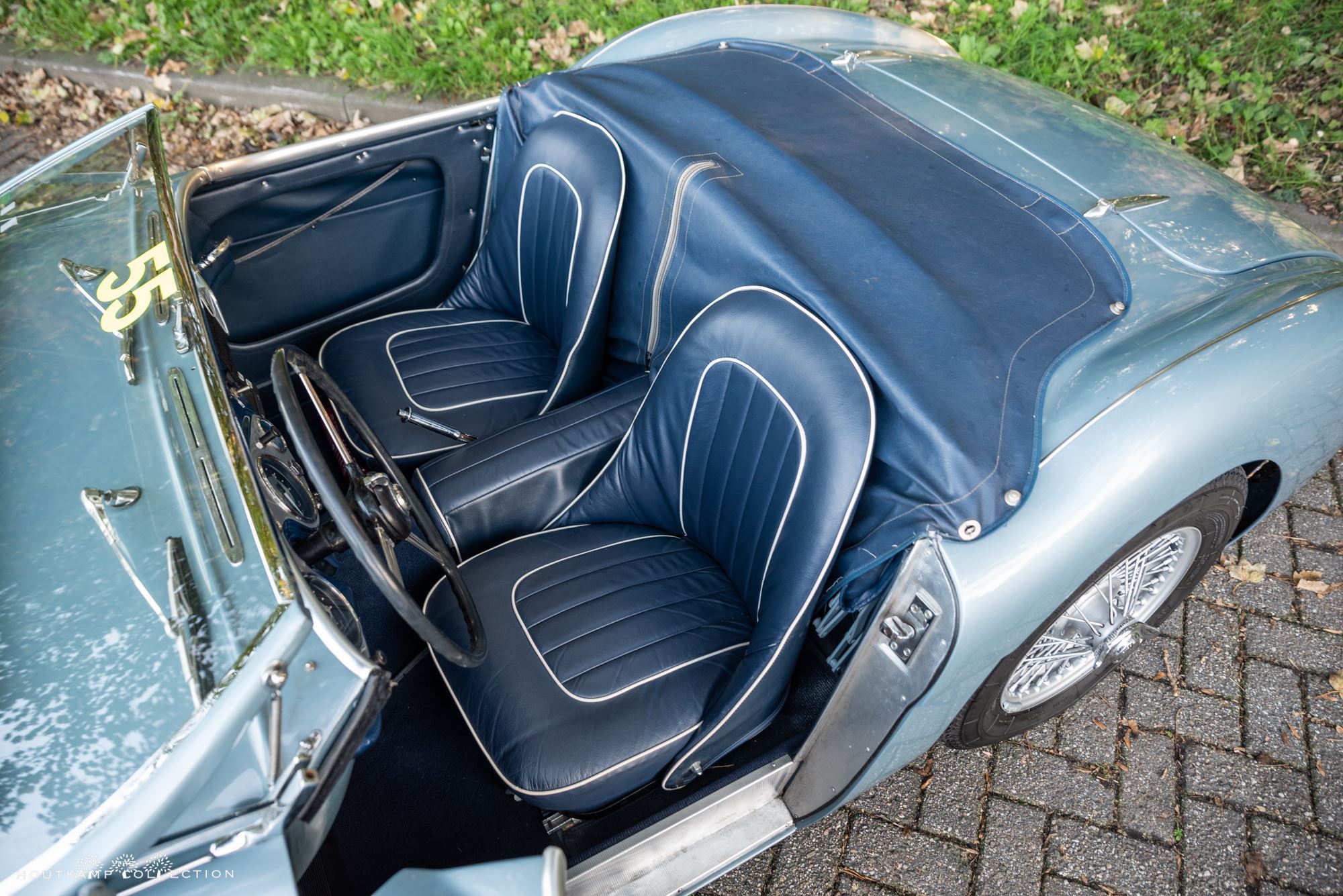 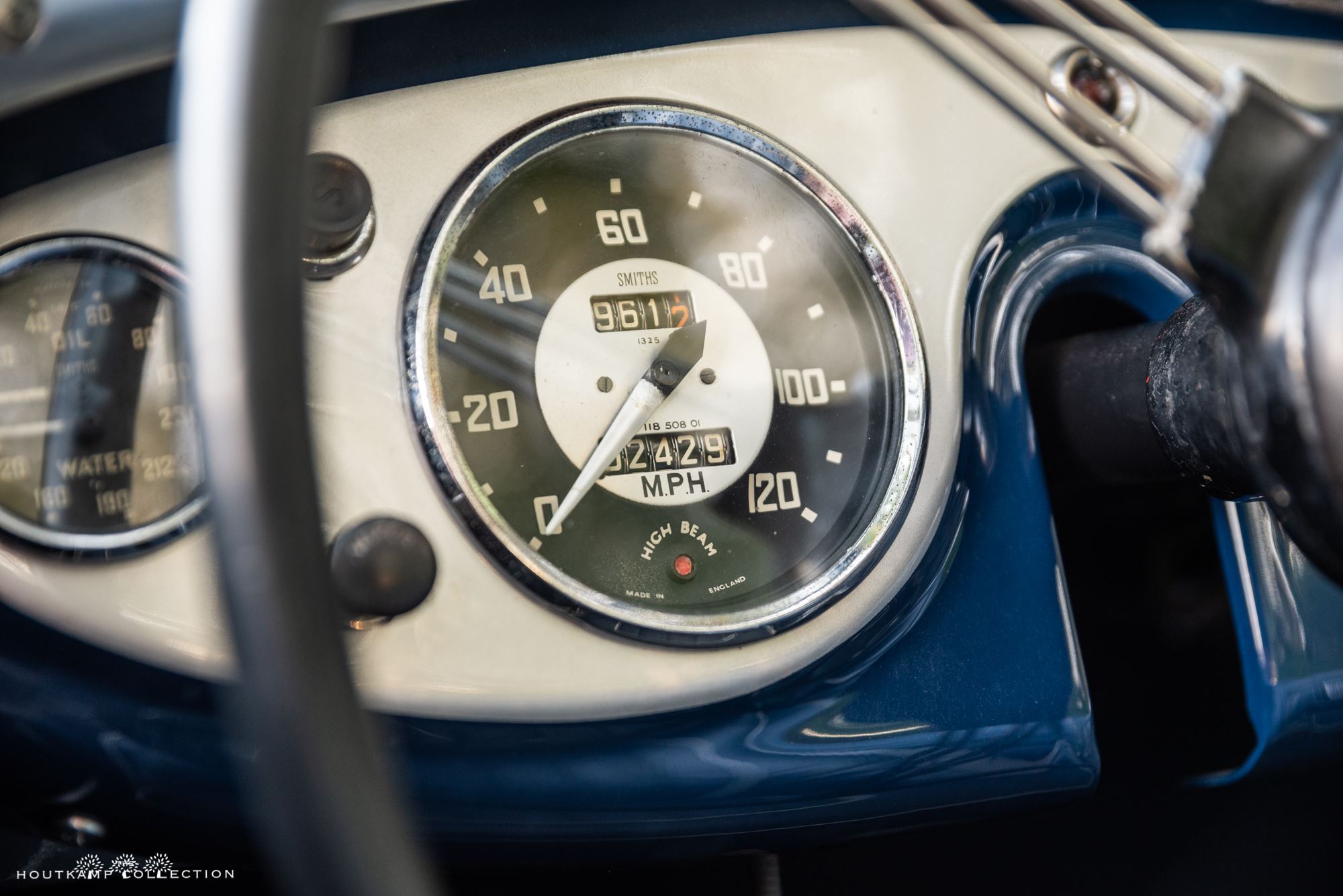 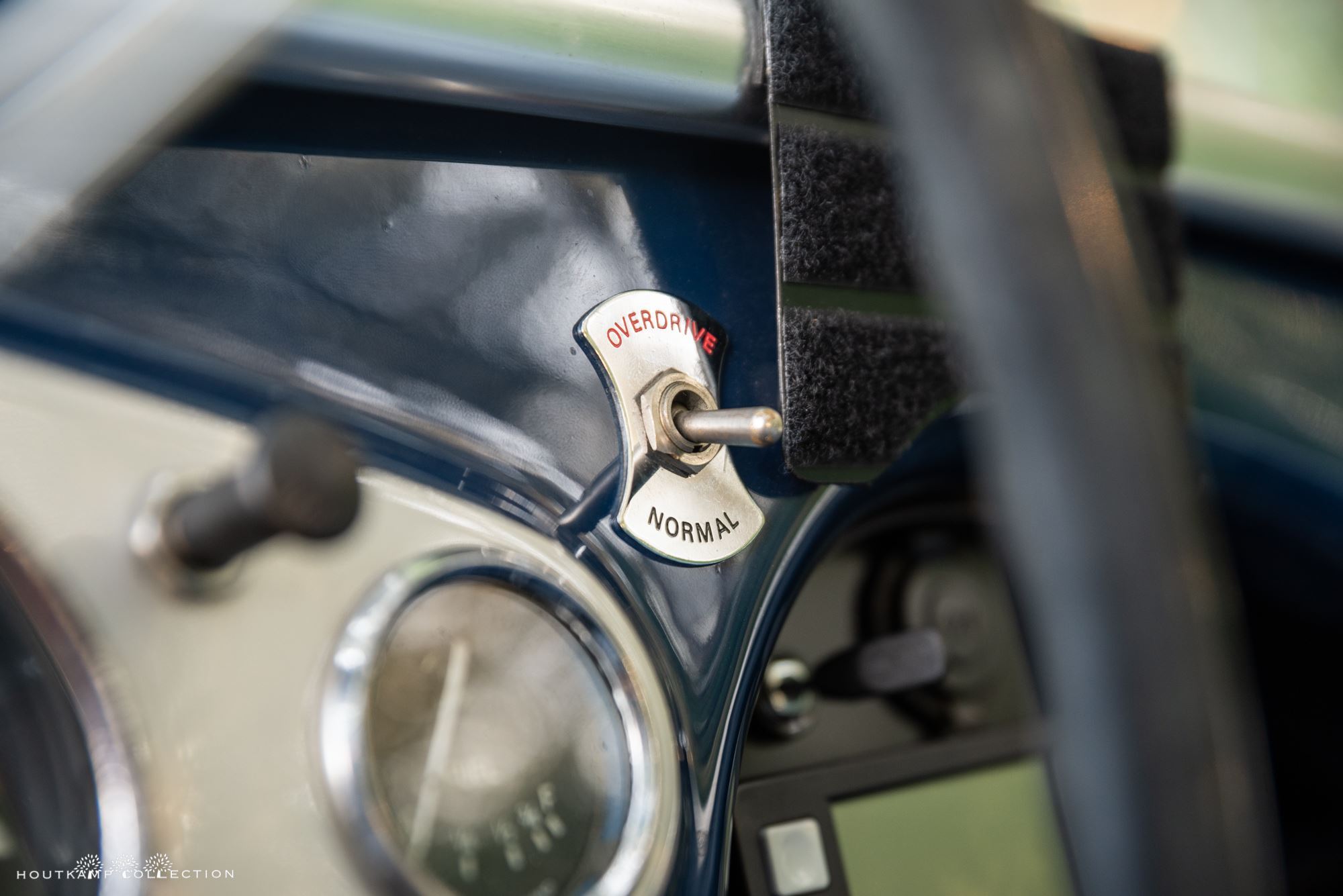 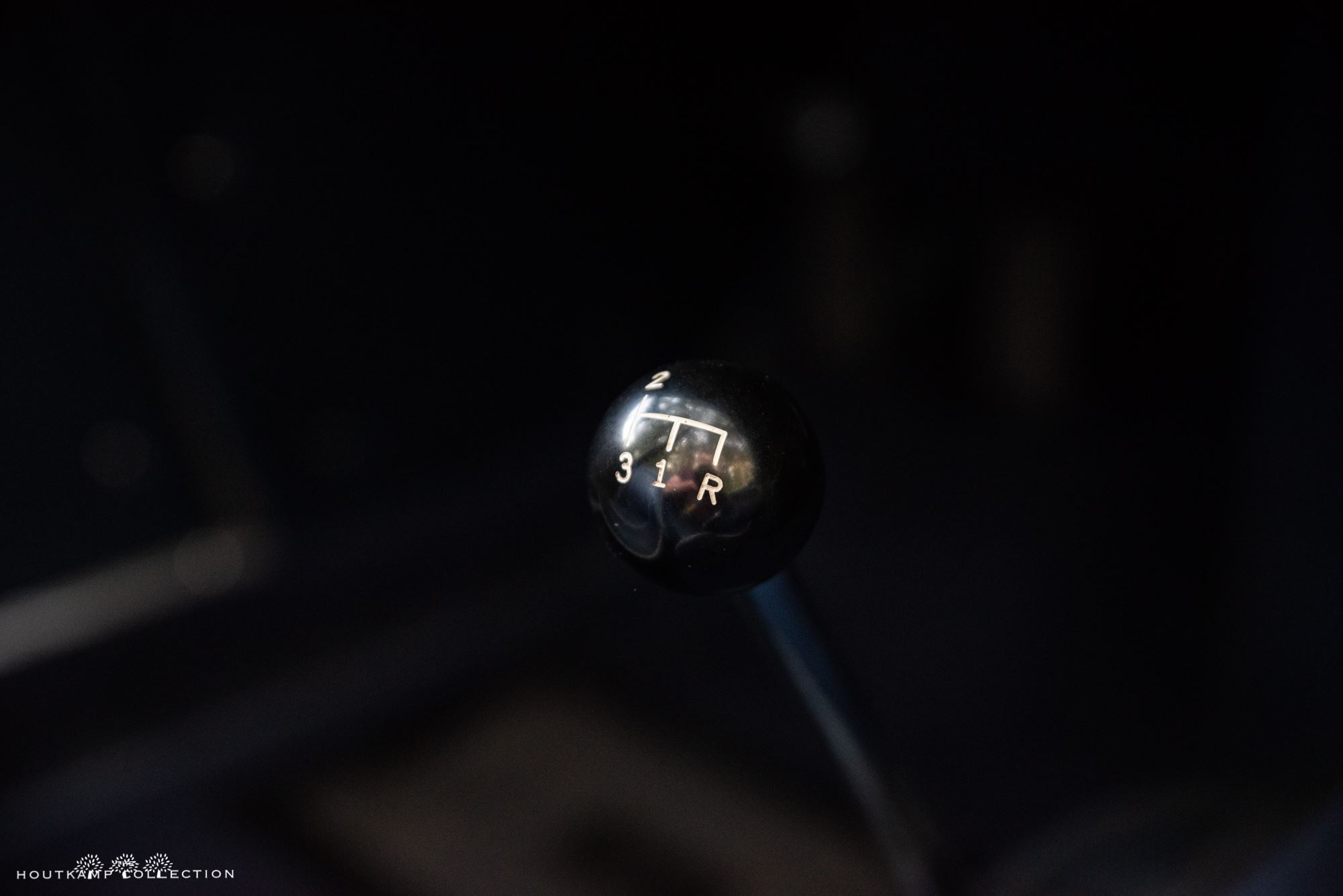 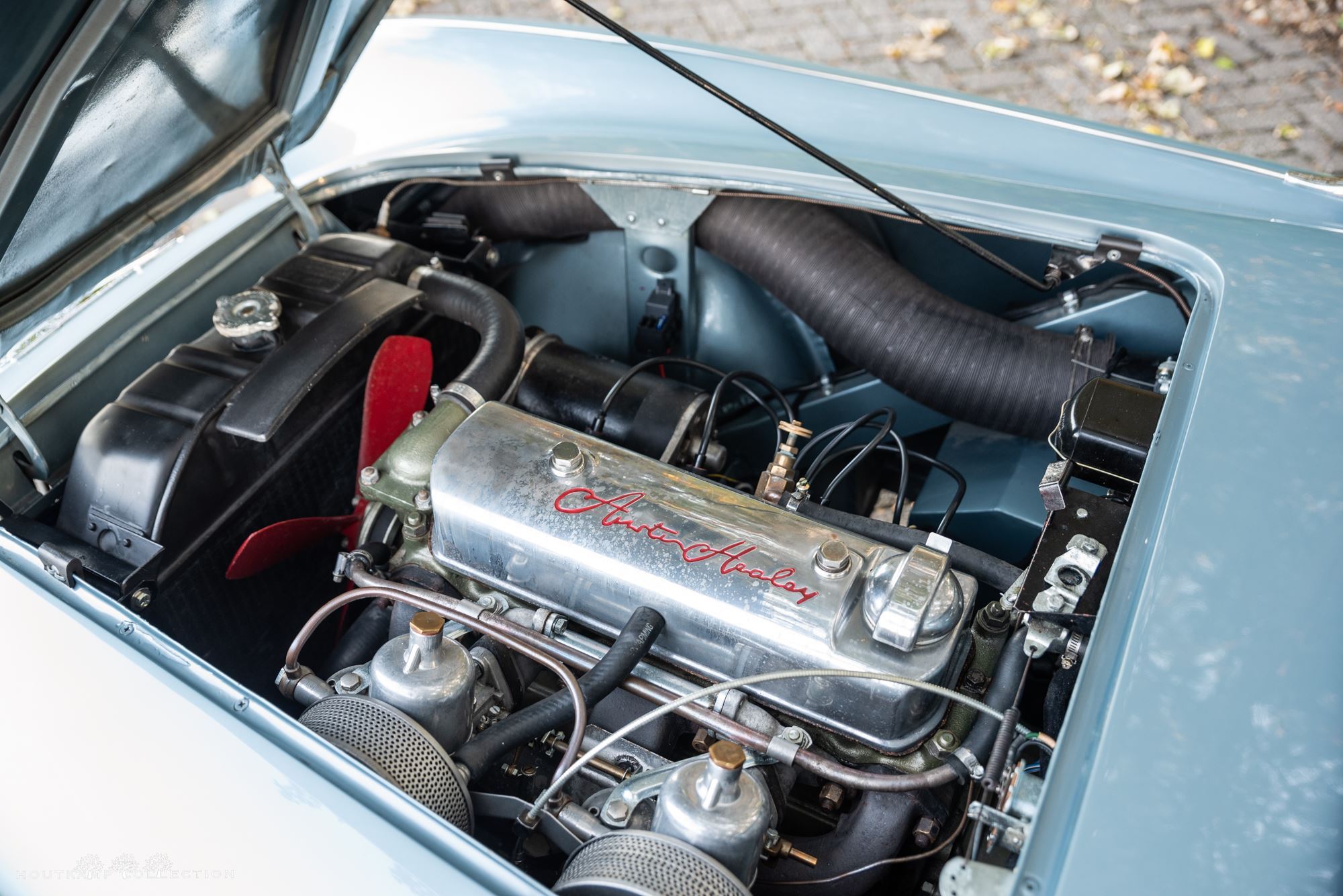 One of the truly great sports cars of the 1950s, the Austin- Healey was a case of the right car at the right time.

Having developed the original prototype for the 1952 London Motor Show, Donald Healey’s little company based in Warwick was unable to take advantage on the unprecedented reaction. Fortuitously, the boss of Austin, Leonard Lord, spotted the Healey and recognised its potential as an affordable rival to Triumph’s successful TR series. As a result, Austin and Healey made a deal to jointly produce and market the 100 under their combined names and a legend was born.

The stunning bodywork, designed by Gerry Coker, was made by Jensen Motors of West Bromwich, the chassis by Thompson Pressings and the cars assembled at Longbridge from March 1953 onwards.

The 100/4, as it was designated, utilized the Austin’s rugged 2.6-litre four-cylinder engine (first seen in the Atlantic), developing 90 horsepower at 4,000 rpm and plenty of torque, had hydraulic brakes front and rear along with well set-up suspension.

With a fold-flat windscreen, minimal creature comforts and plenty of urge, the Austin-Healey was the quintessential British sports car and continues to enjoy a massive following around the world.

The original two-seater BN1 remained in production until August 1955.

The earliest 100/4s are highly regarded by Healey enthusiasts for their purity of line and raw sports car driving experience somewhat diluted on the later six-cylinder models.

The Austin-Healey 100-4 BN1 and BN2 Series cars are considered the “original” Austin-Healey. Between the 2 series, the main difference was the adoption of the 4speed gearbox with overdrive in the BN2 models.

The Austin-Healey offered more power than its MG contemporary and a lower price than the Jaguar, it is no surprise that was very successful at the time.

Customers particularly loved the 1953 Austin-Healey 100-4 as an alternative to the Triumph TR2, Jaguar XK120 and Jaguar X140.

The car offered here is a early 100 that was built the 13th of July 1954, and finished, as it is today, as a left-hand-drive model in Healey Blue and Blue interior.

During its ownership, the car was enthusiastically enjoyed and maintained, but with use comes wear and with age comes deterioration. A good restoration has been carried out.

Cosmetically, the Healey looks very beautiful. The restoration has been carried out extremely well.

The doorfittings are nice and the car is also beautifully restored on places which are not easily visible.

Recently the engine and gearbox have been fully rebuilt and since 2.5 years the Healey has been regularly used during a variety of soft rally events.

We know the former owner very well and he brought his car after every trip immediately to his garage for a complete check.

No money has been spared.

This particular example of the Healey 100 is a beautiful appearance. The typical Healey Blue color fits the car very well. Definitely in combination with the dark blue interior.

The paint is beautiful throughout with very minor signs of use.

The chrome work on the car is close to excellent condition.

The wheels are the period correct painted wheels.

Fittings of the doors, boot and bonnet are impressively nice and also inside the door one can see that this is a beautiful restored example.

The interior of the Austin Healey is in an excellent condition. The carpets, seats, doorcards and dash don’t show any signs of wearing. It’s actually as the body in a beautiful condition.

The dark blue seats are finished with a nice white piping.

The dashboard is nicely and period correct painted.

The chrome around the speedo and tachometer show slight pitting. This part can easily be changed for a new surrounding but we personally like this sort of patina.

The soft top is also as new even as the tonneau cover, the soft top and the side windows.

The engine compartment of the car is exceptionally clean. The car benefits from slightly larger air filters as well as an electric cooling fan to avoid problems in traffic jams.

A Healey 100-4 has in our opinion different faces. It can be a relative comfortable car which can be driven when it is raining with a comfortable soft top.

The power in the Healey is extraordinary and the car benefits from the overdrive which turns the car into a tourer on the motorway.

If you do not drive the Healey, then just take a seat and take a look at the lining of the Healey with keeping in mind that these cars are build in the fifties. It’s a piece of art.

This Austin Healey is ready for entry to numerous desirable events such as the Mille Miglia and will surely be enjoyed for years to come.